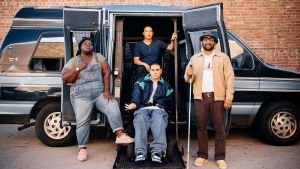 Gabourey Sidibe, Hayden Szeto, Grant Rosenmeyer and Ravi Patel bounce off each other like members of a long-established troupe. Photograph: Samuel Goldwyn Films

Film Title: Come as You Are

Some way into this agreeable American comedy, a sterner voice wonders about the “morally ambiguous” nature of its central premise. Richard Wong’s comedy concerns a bunch of disabled Americans who set out for a specialist brothel across the border with Canada. Well, Helen Hunt got an Oscar nomination for playing a sex worker who services disabled clients in The Sessions. So, it seems as if we’re all right with that now.

You just don’t do that anymore. Throw in the potential for sentimental simplifications of the challenges facing disabled people and you have the makings of a Razzie-winning catastrophe.

That Come as You Are, adapted from a Belgian film of 2011, works so well is largely down to the smooth, quasi-improvised interplay between actors who – however you may view their other qualifications – bounce off each other like members of a long-established troupe.

Scotty is always there to make the most inappropriate remark. Matt works tragedy in with his comic reserve. Mo is the rooted hub. Add in delightful kickback from Gabourey Sidibe as the health worker tricked into being their driver and you have a company of some class.

The comedy is sufficiently successful that, yes, they do risk a few gags that play off the characters’ disabilities. None of those jokes sinks to the level of Pryor and Wilder in See No Evil, Hear No Evil, but a late confusion involving Matt does gesture faintly and bravely towards the blind flower girl in Chaplin’s City Lights (okay this is a stretch, but indulge me here).

The film is bashful about copulation and entirely uninterested in the ethics of sex work. It does, alas, end in a showpiece that nudges us towards inspirational uplift. But the actors have such fun that one is left hoping to see them reunited for a future, less compromised project.

All in all, about 200 per cent better than it reads on paper (though the title is still unforgivable).