Demi Isaac Oviawe of Young Offenders: ‘I naturally have a resting bitch face’

The Young Offenders star on race in Ireland, being tall and juggling acting with school 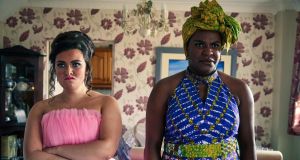 As Demi Isaac Oviawe has it, she was born in 2000 at a moment when Demi Moore “was probably the biggest movie star in the world.” The teenager was, indeed, named after the American star. But let’s be very clear: unlike her Hollywood namesake, Demi Isaac is no Dem-Me.

At the beginning of 2018, no one outside of her hometown of Mallow had any reason to know who Demi – always Demi - Isaac Oviawe was. A typical Munster schoolgirl, she had played camogie and GAA football for some years and had appeared in school productions of Beauty and the Beast, Grease, and Sister Act when, in 2017, she auditioned on YouTube for the Cork-based TV show The Young Offenders.

Her tape includes the immortal words: “Friday is the day everyone goes gattin’, right, there’s a free gaff, you go gattin’, you get mouldy.”

“When other audition tapes went up on Facebook and Instagram and social media I saw them and they didn’t feel natural to me,” she recalls. “I just went: look it, I’m going to take the piss and if they don’t like it, they don’t like it. But that kind of caught their attention for some reason. And I got a phone call a month later from the casting director. I was wearing an oversized hoodie with O’Neills tracksuit pants. I was trying to look like an ordinary North Cork person. And I practised a really thick Cork accent on me. I don’t know why I did that. I’ve never had a thick Cork accent.”

Oviawe had, prior to landing the part on The Young Offenders, intended to train as a secondary school teacher. But that was very much a Plan B.

“I’ve always loved being the centre of attention,” says the 19-year-old. “I always wanted to be a performer of some kind. I wanted to be an actor but my dad used to tell me that there was no point in pursuing it. It was a dream. I should be doing something else. So between the ages of 12 and 16 I was dead set on becoming a secondary school teacher. That’s what I would’ve done. That’s what I was going for. But now everything has changed.”

It certainly has. Nobody could have imagined when Peter Foott’s modestly budgeted coming-of-age comedy The Young Offenders premiered in cinemas in 2016 that the film marked the beginning of Ireland’s most beloved franchise.

When my mother generalises about the place being dirty, she’s talking to me, not the others

As with season two, where Siobhan spends much screen time giving out, Linda proves a master of the “resting bitch face”.

“I do naturally have a resting bitch face,” laughs Oviawe. “My mother tells me that I look like I’m a hard person to approach because I look like I’m about to bite. I’m actually a fun person. I love having a laugh. But my face says different.”

Oviawe, who was born in Nigeria, lost her mother to breast cancer when she was just five. Her father died after being diagnosed with a brain tumour in 2016. She lives with her four younger brothers, her Irish stepmother and her late father’s brother, Courage. As the eldest sibling and the only girl, there is much to be done around the house, especially during those recent lockdown months.

“There is war in our house all the time,” she says.  “When my mother generalises about the place being dirty, she’s talking to me, not the others. My youngest brother is four so he can’t do anything. I just have a lot more responsibilities being the oldest.”

She paid tribute to her late father during her run on Dancing With the Stars last year by performing a rumba with partner Kai Widdrington to the song Dance With My Father by Luther Vandross.

“All my brothers cried afterwards,” she recalls. “We were video calling and all four of them were crying. We couldn’t breathe. The youngest one was crying just because the others were all crying; he didn’t he didn’t even know why he was crying but my oldest brother said: made daddy so proud. They were my best supporters and my best critics.”

At 18, she was the youngest contestant to ever appear on the show, an age that left her juggling Leaving Cert studies and professional choreography, travelling home to Mallow on Sunday night after the live show and attending school on Monday, before returning to Dublin for rehearsals on Tuesday morning. She loved every minute, she says, and retains a special place in her heart for judge Brian Redmond.

“A lot of people thought I hated Brian Redmond but I think Brian Redmond is the nicest guy ever,” says Oviawe. “He reminded me of my dad. He tells you exactly how things are; he’s not going to bullshit you. Lorraine [Barry] will tiptoe around it instead of pulling the Band-Aid. Brian Redmond will check up on you afterwards just to make sure you were okay and to tell you why you said the things. You never see that side of him on TV. He’s just playing this bad guy when in actual fact he’s not one.”

Oviawe has never been afraid to address racism in Ireland. Last year she called out Noel Grealish, after the Galway West TD said an “astronomical” €3.4 billion (over an eight-year period) was sent to Nigeria from Ireland. (Official figures revealed that only €17 million a year was sent.)

“I used to get slagged off for my hair in school,” she recalls. “I’d get remarks that my lips were too big or my arse was too big. The stereotypical things, you know? And the people who said those things to me when I was small are the same people who now turn around and say: Oh my God! I went to school with you and I’m so proud of you. They tried to destroy me in primary school literally. You develop a thick skin.”

She understandably tries to avoid negative remarks on social media and reading comments below the line. She has, unfortunately, seen enough in passing.

“I spoke about being a person of colour to the Echo because of Black Lives Matter and George Floyd,” says Oviawe. “You try to avoid looking but when you are speaking about something that personal, it’s hard to avoid. Some of the comments are so nasty, I wouldn’t wish them on my worst enemy:  just get on the boat and go back to your own country. And because these comments were connected with Facebook I could see that lots of those people were like 40 and 50 years of age and they’re saying this to me: a teenager. That’s embarrassing.

Happily, she has family and friends to lend moral support and to slag her mercilessly about her newfound celebrity status.

“I have a small circle of friends and they found it so weird when people started approaching me on the street,” she says. “At first they were like: Oh my God, I can’t believe this is actually happening to Demi!  But by the time the 16th person has come up, they’re like: seriously? And by the time the 20th person comes up: they’re like I’m actually going to go; I’ll see you later.”

Last November she returned to Nigeria for the first time since infancy.

“No one knew I was coming,” she recalls. “They only knew my uncle and my mum was coming. I’m a tall person. I’m 5ft 10; so tall, I wish I could chop three inches off at the ankles. And my grandmother grabbed me and insisted that I sit on her knee. I never cried so much in my life. It was very emotional.”

The Young Offenders series 3 is on RTÉ One TV from July 24th.

Blindboy: ‘Being recognisable is absolute hell’
8