Film review: Taboo-busting comedy with a generous spirit and a concealed polemic edge 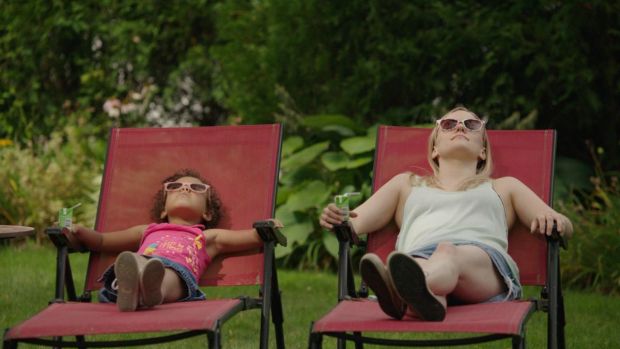 Early on in Saint Frances, a delicious comedy that has a concealed polemic edge, we get something like a declaration of intent. When Bridget (Kelly O’Sullivan) and Jace (Max Lipchitz) come to after a night of energetic sex they find the sheets and parts of their bodies smeared with blood.

Back in the late 1990s this would be an invitation for a festival of “gross-out comedy”. Or would it? Menstrual blood was a such a taboo the frat-pack classified it as the only unacceptable bodily fluid.

At any rate, that is not what happens. After shrugging off some mild embarrassment, the characters behave as modern humans usually do in such situations. They get on with their day.

O’Sullivan, writer and star, has pinned a generation beneath her microscope. Don’t yell at us. Bridget herself, now 35, admits that she counts as an older “millennial”. Few recent films have done better work in teasing out that demographic’s concerns.

Any age could accommodate the basic story arc. A youngish woman, concerned about her lack of direction, secures a job as nanny to a child of well-off parents. While gradually making peace with an initially recalcitrant charge, she negotiates the ups and downs of a romantic relationship and becomes caught up in her employers’ marital squalls. You could imagine Judy Holliday in that. Or Jane Fonda. Or Julia Roberts.

The film’s embrace of contemporary attitude shifts and once-taboo subjects – for comedy, anyway – sets it very much in the turbulent present. Happily, few will now remark on the parents being two women (Charin Alvarez and Lily Mojekwu play Maya and Annie), but the casual working through of a plot involving abortion still feels like an innovation.

You can see the bad boyfriend a mile off, but even he doesn’t turn out to be any kind of monster

To an even greater extent than the recent Obvious Child, Saint Frances is keen to stress that termination is an ordinary part of human experience that need not upend lives. Bridget ultimately acknowledges that she should have taken some time to pause and process, but the aftermath is mostly rendered as near-ambient background noise.

In one brief scene of gynaecological comedy (you’ll know it when you see it), the film presumes a little too much on the audience’s unquestioning comfort with the mechanics of abortion. That still feels like a risk worth taking.

Future generations may sniff at our squeamishness. They may wonder why so many reviews of Saint Frances focus so acutely on reproductive issues. Loosely structured, but satisfactory in its narrative shape, the picture deftly escorts us through the embarrassments and dilemmas of everyday life in a hipper part of Chicago.

Director Alex Thompson, O’Sullivan’s partner, bobs his camera after the ambulatory characters in a fashion that invites intimacy without showboating. The principals are painted in soft watercolours rather than bold lines. Bridget is hard for us to know. Jace is that rare partner in a romantic comedy: a nice fellow who allows his lover to make her own decisions unchallenged.

For the most part, this is a film about nice people who at least try to do the decent thing. You can see the bad boyfriend a mile off, but even he doesn’t turn out to be any kind of monster. The one truly appalling character – glimpsed in cameo – could hardly be better suited to current discourse.

While feeding her baby in the park, Maya is bellowed at by an entitled blonde lady who finds the process inappropriate for a family space. All future PhDs on “The phenomenon of the Karen in contemporary popular culture” must reference this scene. They should further note that the characters respond with underserved generosity of spirit. Saint Frances is that sort of film.