The Night Eats the World: A new kind of zombie hits our screens

Review: Non-vocal zombies make for a fine and creepy innovation – not a rampaging horde in sight 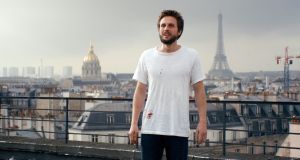 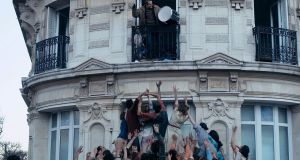 We know what you’re thinking: not another zombie movie. Ten (and counting) series into The Walking Dead, at a moment when most people could do with a rest from plague-themed culture, Night Eats the World lands on Shudder to prove there’s still some life in the undead. This first film from French director Dominique Rocher begins with a trope borrowed from The Day of the Triffids °– and recycled by 28 Days Later and elsewhere – by placing the hero just beyond reach as the zombie plague hits.

Miserable protagonist Sam (Norwegian actor Anders Danielsen Lie) sticks out like a sore thumb at a lively Parisian party. He’s only there to collect his cassettes from a former girlfriend (Sigrid Bouaziz). After trudging miserably and drunkenly to an empty room to retrieve the relevant box, he falls asleep; oblivious to the later sounds of chaos outside. He wakes up and walks out into a blood-splattered apartment. It takes the appearance of his now zombiefied ex for Sam to realise that the apocalypse is upon him.

And here’s where the film deviates from the movieverse formula. Rather than seeking community, as is the norm in every movie from Shaun of the Dead to I Am Legend, Sam sensibly retreats into an apartment block where he rifles through now departed neighbouring flats for cans, locks a zombie in the elevator shaft, and makes a note of rations.

Survival instincts – gathering rainwater when the water supply taps out, careful barricading – are offset by Sam’s deteriorating psychological state. Jogging around the building and drumming on improvised musical instruments (and actual drums) give way to hallucinations and dark ruminations: “My mother’s not the type to run over people to survive,” he tells the elevator zombie. “So I guess it was over pretty quickly for her.” He cackles maniacally when he accidentally almost shoots himself in the head.

Anders Danielsen Lie makes for a thoughtful hero as he slowly comes to realise that “Death is the norm; now I’m the one who’s not normal.” Non-vocal zombies make for a fine and creepy innovation. And not a rampaging horde in sight.

On Shudder from July 17th