Paddy Slattery: ‘Film could be poetic. It could be spiritual’ 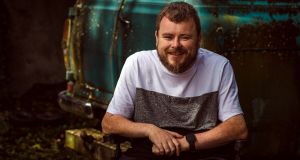 Paddy Slattery: “We shot in August and September for four weeks in East Wall. It was brilliant crack but hard work.” Photograph: Nina Val

As a teenager, Paddy Slattery recalls being “a bit of a rogue”, but only a bit, hopping walls and robbing apples. He lived “very much in his body” as he puts it, playing football, boxing and – he smiles at the thought – “chasing girls”.

At 15, Slattery, the eldest of eight siblings, left school and headed for London to work on the building sites.

“I loved hard work,” he says. “I loved working on the bog from an early age. And I saw my mother and the work she had to do: she raised the eight of us on the children’s allowance and odd jobs. So working on the building sites, I was able to send money home. But I missed my ma’s cooking and I missed my family and there was a girl back here that I fancied . . . There was no social media then so you were kind of cut off once you’re over there. So I packed my bags and came back and got an apprenticeship painting and decorating with a local company in Tullamore. It wasn’t much money but at least I was at home.”

On Monday, October 14th, 1996, Slattery and two friends set out from his native village of Clonbullogue. Ordinarily, the gang headed to Dublin at weekends in their work van. On this occasion, however, the van was in the garage. Slattery could hardly believe his luck when a stranger pulled up offering a lift. But not too far into the journey, the car crashed.

I was driven by the desire to walk again. I was trying to learn different ways figuring out mind over matter

On the operating table, thinking he would be returning to football practice in a matter of weeks, a doctor informed him that he would never walk again.

“You can imagine that at 17 and you’re in a crash and you’re left paralysed, your whole world changes,” says Slattery. “Suddenly you are in the head and you are relying on emotional experience as opposed to physical experience. So that alone was a shock. But as I’ve said before and I say to this day: I genuinely feel like that was the moment when my body switched off and my imagination on. Because once that happened, it sent me on a psychological quest. I had to dig deep inside myself to figure out who I was and where I was going. I think that’s where the real journey started for me. That’s where the real magic happened.”

This isn’t some kind of positive spin gleaned in hindsight. Speaking from his family home in Clonbullogue, Co Offaly – the same one where he was “born and reared” – Paddy Slattery recounts his accident and the years of rehabilitation that followed with a smile on his face. He was, he says, simply happy to be alive. You do get second chances in life, he insists. Even the tedium of extensive periods in hospitals proved to have an upside.

“There were a few years of sheer boredom to be honest,” he says. “Initially, after the crash, I was in Dún Laoghaire rehabilitation hospital for a year. And then I was in other hospitals for maybe a year after that for lots of physical therapy. So that was three years of my life that was eat, sleep, exercise and watch telly. I started watching movies and listening to music during those years.

“Initially, I was driven by the desire to walk again. I was trying to learn different ways figuring out mind over matter. I was learning kinesiology and reiki and all this kind of stuff. I learned lucid dreaming. I started wandering off into my imagination a lot. And slowly, during that time, I started to fall in love with movies.”

That love, at first, was for what he calls lad’s movies. From rewatching Martin Scorsese’s Taxi Driver and Quentin Tarantino’s Pulp Fiction, he developed a taste for DVD extras, and from there, he discovered the Artificial Eye imprint.

“I started buying films made by Tarkovsky, Werner Herzog, Ingmar Bergman, Alejandro Jodorowsky and they just blew my mind,” says Slattery.  “Because suddenly I realised that film wasn’t just about popcorn. It could be poetic. It could be spiritual. I started to look at the medium completely differently.”

As another avenue of escape, Slattery began writing poetry and short stories. When friends and family were impressed with his doodlings, he graduated to music and screenplays. His debut album, Stand and Deliver, was completed in 2006.

“People started to say: you should consider maybe making a short film,” he says.

“I had so much pent-up frustration from doing nothing and so many frustrations about the world. I started to think that if I could make something then someone might watch it or listen to it and maybe be inspired or entertained. Thinking that felt like a power had been handed to me.”

There were, of course, logistics to consider. Slattery accordingly reached out to director Declan Recks, who shot Pure Mule on Slattery’s Laois–Offaly home turf, to ask for advice.

“I sent him an email,” recalls Slattery. “I told him I was quadriplegic and that I wanted to be a director. And he said, Paddy, with the technology we have today, there’s always a way to direct a film. You can direct on a wireless monitor.”

Since he completed his first short film, Out of Tune, in 2006, Slattery has amassed more than a dozen credits as a writer, director and producer. To date he has won awards at Indie Cork, the Royal Television Society, and the Mexico International Film Festival. In 2015 he produced the IFTA-nominated Skunky Dog starring John Connors.

Connors, alongside upcoming actor and director Tristan Heanue and Slattery, have formed an unofficial collective as they wander in and out of each other’s projects. Heanue has directed Connors in the 2015 short, Today. All three parties are involved in Slattery’s hotly tipped debut feature, Broken Law.

“I worked with Tristan back in 2012 on my second short film,” says Slattery. “And from the minute I met him, I saw young Henry Fonda. It wasn’t really even an audition; he had the gig immediately. So I’ve produced some of his shorts. And I always knew he was going to be in Broken Law. I worked with John on a short film called Skunky Dog. And I immediately hit it off with John. He’s an old head on young shoulders. He has the soul of a Celtic warrior. We could sit and talk for hours. Especially after the day’s shoot when you’re back in the hotel lobby having a few nightcaps and sneaky sing songs.”

It has taken more than a decade for Slattery’s debut feature Broken Law to make it to a cinema near you. First conceived as a choral drama in the style of Paul Thomas Anderson’s Magnolia, Slattery put what was then called The Broken Law of Attraction back in the drawer in order to “learn the trade”.  Over the years, it morphed into a Dublin-set noir concerning two very different brothers.

We had to beg, steal and borrow again for post-production

Joe (Graham Earley) is released from prison and is immediately picked up by his ne’er-do-well chums, Wallace and Pete (John Connors and Ryan Lincoln bring the bickering). Like many of the movieverse’s ex-convicts, Joe wants to go straight, if not quite as straight as his respectable garda brother David (Heanue). Schemes and shenanigans ensue.

“I have three brothers myself,” says Slattery. “One of my brothers, James, and I hope he doesn’t mind me saying this – he’s sort of the black sheep of the family. So I was inspired by that dynamic between myself and James. Because he was always the scallywag and I was the golden boy because I was the eldest son and I was out earning.”

The production was a seat-of-the-pants affair. Following a few years stuck in development limbo – or possibly development hell – a crowdfunding campaign, lots of called-in favours, and the assistance of the Centre for Independent Living, the cameras started rolling in 2018.

“We shot in August and September for four weeks in East Wall,” says the writer-director. “It was brilliant crack but hard work. Leading up to the whole thing, there were a few times that my family looked at me and I was just physically, mentally, emotionally and financially broke. But I somehow persevered even through many moments where I thought, this is insane.

“But once the train left the station, once we were shooting, I knew there was no going back. And then we had to beg, steal and borrow again for post-production. And then we are racing for the finishing line for a Dublin premiere in February.”

Following some last minutes edits to reduce the number of swear words from 173 to 131, Broken Law debuted at the Dublin International Film Festival, where it picked up a Special Jury Award from the Dublin Film Critics Circle, the Aer Lingus Discovery Award and a positive notice from The Guardian.

“Honestly, the sense of accomplishment and the sense of relief knowing we did it; it’s like a massive weight taken off my shoulders. It was unreal. I can’t even remember the Q&A afterwards.”

Broken Law is in cinemas from July 31st