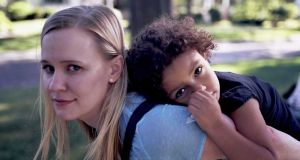 SAINT FRANCES ****
Directed by Alex Thompson. Starring Kelly O’Sullivan, Ramona Edith Williams, Charin Alvarez, Lily Mojekwu, Max Lipchitz. 15A cert, limited release, 100 min
Fascinating comedy concerning a young woman’s up-and-down adventures starting a new job while managing a ho-hum love life. The film is already famous (notorious?) for breaking certain taboos regarding menstruation and abortion. It was worth taking those risks. But Saint Frances is principally memorable for its charming depiction of ordinary people coping with ordinary problems in a confusing world: pregnancy, jealousy, guilt. O’Sullivan, writer and star, is unshowy in both areas, but no less captivating for that. DC

A church choir director takes over a drag club in San Francisco.This movie from playwright and director Thom Fitzgerald might have been created to illustrate Christopher Isherwood’s argument that “You can’t camp about something you don’t take seriously.” There’s nothing particularly novel in the plot or characterisation, but there’s plenty that’s camp. A singalong funeral? Lucy Lui’s uber-trashy outfits? Jacki Weaver’s spidery rendition of Total Eclipse of the Heart? Isherwood can relax. TB

Bellocchio, director of the kinetic Mussolini biopic Vincere, examined the story of Mafia informant Tommaso Buscetta. The Traitor has all the trappings of an indecently immoral entertainment. Yet it has turned out oddly flattened. Too much is taken up with uninteresting muttering in the shadows. Secondary characters are insufficiently developed. The lengthy courtroom scenes in the later stages ultimately become suffocating. But Favino keeps it alive with an enigmatic performance that hints at horrid depths. DC