The Witches are back 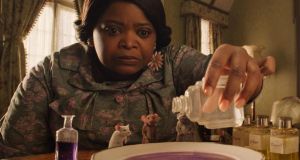 In 2018 Octavia Spencer became the first black performer to score back-to-back Oscar nominations for Hidden Figures and Guillermo del Toro’s best picture winner The Shape of Water. (She won the Academy Award for supporting actress for her role in The Help in 2011.) And now, perhaps even more impressively, the actor and producer has come up with a plan to save Halloween.

“If I were a parent I would have my kids dress up on Halloween,” she explains. “I would have a Halloween party in a very different way. Instead of having kids trick-or-treat, they will parade around the neighbourhood so that the elderly people see them from their porches and see the costumes. Then they can go home and watch our movie. Or any movie.”

“Our movie” is The Witches, a new adaptation of the 1983 novel by Roald Dahl. All told the film has been more than 12 years in the making. In 2008, del Toro announced that he would direct a stop-motion feature adaptation of The Witches, a fantastic story about a wiccaphobic young boy who gets trapped in a hotel where an annual convention of witches is taking place. Del Toro’s chum Alfonso Cuarón(Children of Men) was initially pencilled in as the project’s director before assuming the role of producer.

Fast forward a few years and del Toro joins Cuarón as a producer, making way for Back to the Future director Robert Zemeckis. Working with TV’s Black-ish creator Kenya Barris as his co-writer, the Oscar-winning filmmaker relocated the action from Europe to 1960s Alabama. The good guys are now an unnamed African-American orphan (played with great charm by Jahzir Kadeem Bruno) and his folk healer grandma (Spencer).

“I love that there are some people who don’t know that the original grandmother was not a woman of colour and neither was the boy,” says the Alabama-born Spencer. “Guillermo and Alfonso and Kenya – at each iteration of the script – decided to have people of colour. So I don’t think this is a remake; it’s a reimagining. We reimagine grandma and the hero as African-American.

“And I love that idea that grandma is from the south. That brings a very different feeling. There is a very different feeling to people from the south. I just thought about my grandma. I thought about a lot of older women that I encountered as a kid. She has empathy but she’s also a tough-love grandmother because she knows that her grandson will have to stand on his own two feet.”

Zemeckis’s film not only shifts the setting to 1968 Alabama – lending the all-white witches a fierce new hue – it mines a cartoon grammar for laughs. Watching adult legs chasing after children transformed into mice in a movie by the director of Who Framed Roger Rabbit and Death Becomes Her, it’s impossible not to think of Tom & Jerry and other classic animations.

Anne Hathaway’s campy Grand High Witch, in stark contrast to the chilly performance given by Anjelica Huston in Nic Roeg’s 1990 version of The Witches, goes full “Ru Paul’s Drag Race” as she puts it.

“The original film has that perfect Anjelica Huston performance,” says Hathaway. “It already exists. So in order to justify making this movie we had to have a reason for it to exist. I was definitely inspired by Looney Tunes. Bob [Zemeckis] and I talked about Who Framed Roger Rabbit. It was one of my favourite movies growing up. It’s a mark of the level of what we were going for.

“When they were going to make my big nostrils – even though Bob works with the most brilliant CGI creators in the world – he couldn’t do what he wanted to do with the nostrils. He actually had to go and find old-school WB animators to get the comic timing right. You can almost see the speech bubbles. The scariest part for me was knowing how big we were going. What if we missed? That was a highwire act.”

Rather pleasingly The Witches reunites Hathaway with her Devil Wears Prada co-star Stanley Tucci. The actor, who plays the hapless hotel manager Mr Stringer,was relieved to discover that the new film is very different – read less traumatising – than its 1990 predecessor.

“I think Miranda Priestley was a lot scarier because she was real,” says Tucci of Prada’s Anna Wintour ersatz. “But [Huston] was pretty scary. I watched the Nic Roeg film after I was offered the job. I’d never seen it. I watched it and I found it so disturbing. I almost had to turn it off. I practically had nightmares after watching it. It’s really ugly. That’s the word I want to use. On every level it’s ugly. I’m not saying it’s bad. It’s just visually jarring.”

Freudian child psychologist Bruno Bettelheim knew well the value and effects of macabre tales on young, impressionable minds. Writing in his seminal 1978 book The Uses of Enchantment: The Meaning and Importance of Fairy Tales, Bettelheim suggests that “even more than at the times fairy tales were invented, it is important to provide the modern child with images of heroes who have to go out into the world all by themselves and who, although originally ignorant of the ultimate things, find secure places in the world by following their right way with deep inner confidence”.

Take away scary stories and movies and a child never learns to master his or her inner monster. No modern children’s author understood the catharsis of darkness better than Dahl. Thus Augustus Gloop is sucked into a pipe after he falls into Willy Wonka’s chocolate river. George mixes antifreeze and shampoo into the Marvellous Medicine for his mean grandmother. A charging rhinoceros kills the hero’s parents in the opening section of James and the Giant Peach. The hunters next door are turned into bird-like creatures in The Magic Finger.

And, lest we forget: the moment when the young protagonist of The Witches is transformed into a mouse by a coven of hideous, evil sorceresses.

“I love Roald Dahl,” says Tucci, who cites Danny the Champion of the World as his favourite Dahl book. “I’ve always loved the stories. I remember reading them to my older children and stepchildren. And now I’m reading to the little one. Dahl is an extraordinary writer. Some of the short stories for adults are amazing. You never get tired of them. He was never afraid of the darkness. Which I like.”

Hathaway, for all her outrageous wigs and costumes, was keen to channel that Dahl brand of catharsis into the new film.

“Part of the reason I play the part the way I do is to show children that you have to stand up to evil,” says the Oscar winner. “Not just stand up: you also have to laugh at it. Laugh in its face. When someone walks around describing themselves as a genius, they are ridiculous. I wanted to be clear about her brazenness. And I did have a deeper hope with that.

“When you see somebody walking through the world who is clearly evil but nobody is stopping them, you have to put an end to that kind of behaviour. Because evil is corrosive. By the end, she is so cocky, she doesn’t even have to hide it. She’s going to treat everybody terribly and exterminate all the children and look fabulous doing it. She doesn’t care.”

The Witches was originally scheduled for a global theatrical release just ahead of Halloween. But in common with Trolls World Tour, Scoob!, Mulan and Pixar’s incoming Soul, the film has been diverted on to such premium streaming services as iTunes, Amazon, Sky, Microsoft and Apple TV. The cast is philosophical about this last-minute switch.

“Nothing tastes better than the popcorn you get at the theatre,” says Spencer. “I love the dark and cold of the theatre in the summer. I’ll never not want to go to the movies. But right now we have to keep people safe. And I’m grateful that they didn’t hold this movie, that they found a way to release it for Halloween.

“I’m excited that people who loved the original movie can now share our Witches movie with their kids at this time when they’ve been unable to see their friends.”

The Witches is on PVOD