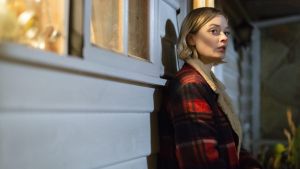 The fractured family at the heart of this discombobulating new horror coupled with the film’s rapturous reception at the Sundance Film Festival last January has, inevitably, led to comparisons to Ari Aster’s Hereditary.

Certainly, Relic would not look out of place in a programme of such recent so-called art-horrors as It Follows, The Babadook, and The Vigil. In common with these titles, the debut feature from writer-director Natalie Erika James functions as both an allegory and a nightmarish descent into this year’s creepiest movie home.

When Kay (Emily Mortimer) gets a call from police that her elderly mother has been missing for a couple of days, she and her daughter Sam (Bella Heathcote) drive to granny’s remote, forest-bound home to investigate. Edna (Robyn Nevin) finally reappears with no recollection of where she has been. Spooky doodles and spidery notes – one reads “don’t follow it” – suggest that the older woman is succumbing to Alzheimer’s.

The horror of watching a loved one disappearing into dementia is paralleled by increasingly disconcerting sounds. Spots of mould around the house are made ominous by the rattling sound design and cinematographer Charlie Sarroff’s creepily contemplative lensing. Brian Reitzell’s music is equally unnerving. The house, in common with its elderly occupant, seems to be losing the run of itself. No wonder the neighbours no longer come around.

There are echoes of classic 1990s J-horror spook-outs – Ju-On: The Grudge, in particular – and of the irregular dimensions of Mark Danielewski’s 2000 novel House of Leaves, but the multigenerational disputes and the careful account of Alzheimer’s make for something more than an effective haunted house movie.

Mortimer and Nevin give big, powerful performances. Heathcote, who is probably best known for playing a scheming Nazi propagandist in Amazon Prime’s The Man in the High Castle, is a revelation. Motherhood is not an easy enterprise but it’s seldom this uneasy.

On digital HD from October 30th