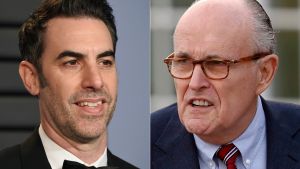 It’s a bit of a spoiler – and quite a coup for the film-makers – but by now you’ve likely read about former mayor of New York Rudolph Giuliani’s appearance in this long-awaited Borat sequel.

It’s a cameo that is undignified as it is unplanned, one in which Donald Trump’s personal attorney is seen lying on a bed and reaching into his trousers in the presence of Maria Bakalova, the 24-year-old Bulgarian actor who plays Tutar, Borat’s 15-year-old daughter.

Before his little lie-down, Guiliani has, on camera, spouted full-on bat-eating conspiracy theories regarding Covid-19: “Trump,” he says, has “saved a million lives because he acted swiftly.”

This is but one of several gruesome tasks that fall to the brilliant, daring Bakalova during – to use its full title – Borat Subsequent Moviefilm: Delivery of Prodigious Bribe to American Regime for Make Benefit Once Glorious Nation of Kazakhstan.

As Sacha Baron Cohen’s must-loved satirical creation arrives in the US for a second round of skewering, he finds a country changed by strongman Donald Trump, whom the fictional Borat has been sent to woo.

He is also easily recognised after the success of 2006’s Borat. A roadside Halloween store even stocks a “foreign journalist” Borat costume. Using alternative disguises and forming a pleasing double act with Bakalova, the post-Soviet stereotype acquires a mobile phone and a daughter cage, loses a monkey (Kazakhstan’s Minister for Culture), and leads a open-air gathering in a chorus of: “Obama – What you going to do? – Inject him with the Wuhan flu? Who wants to chop him up like the Saudis do?”

Mostly, he’s concerned with following the Ministry for Agriculture and Wildlife’s Daughter Owning Manual. Tutar, who idolises Melania Trump, “the happiest wife in the world” is supposed to be a gift for “Vice Pussy Grabber Michael Pence”, but somewhere along the way, the goalposts shift and the movie assumes a conventional shape around its candid-camera high jinx.

The aim, and often the targets, are scattershot. Anti-vaxxers, anti-Semitism, Holocaust denial, and Trump supporters variously find themselves in the firing line. The song remains the same in terms of Baron Cohen’s punking methodology.

The transgressive humour that made the first film a $262.6 million-grossing hit may no longer be novel, but it is crudely effective. Borat and Tutar’s appearance at a grotesque daddy-daughter debutante ball is best watched between your fingers. A visit to a Christian “women’s health centre”, ends with a pastor shouting that “God is the one who creates life” when Borat suggests he has impregnated his own daughter.

Patrick Freyne on Christmas ads: ‘No one belongs on the naughty list.’ This should be big news
10