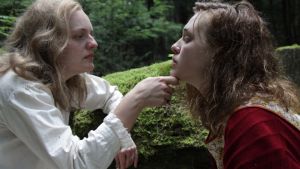 Josephine Decker is one the most exciting voices in American cinema. Martin Scorsese is a fan of her fractured, sexy, surreal, disconcerting dramas Butter on the Latch, Thou Wast Mild and Lovely and Madeline’s Madeline. Scorsese serves as an executive producer on Shirley, Decker’s suitably eerie biopic of the American author Shirley Jackson, essayed here with cutting wit and dulled depression by Elisabeth Moss.

Rose (Odessa Young) is initially terrified of the famous writer who, as the film opens, is in no state to keep house or leave it. Or, as Shirley puts it: “A clean house is evidence of mental inferiority,”

Thus, her manipulative academic husband Stanley (Michael Stuhlbarg) invites Rose and her assistant lecturer husband Fred (Logan Lerman) to stay and help out around the house. “How is your rump roast?” asks Stanley, without bothering to hear Rose’s response.

Slowly, after several outbursts and salty encounters, Shirley bonds with the younger woman. Their relationship is quasi-carnal and definitely carnivorous. Rose becomes Shirley’s muse in the writing of Jackson’s 1951 Gothic novel Hangsaman, and their fractured, marginalised lives start to bleed between fact and fiction.

It’s more complicated than that. The playful, learned, duplicitous script, written by Sarah Gubbins and based on Susan Scarf Merrell’s novel, is a homage to all things Jackson. It’s a complete fiction that is slavishly faithful to her work.

The trapped, supernatural spaces that so many of her heroines find themselves in, the various student-chasing male academics, and the permanent sense of unease found in Jackson’s stories is felt in every shadowy frame. (Victoria cinematographer Sturla Brandth Grøvlen ensures the film is both literally and figuratively dark; at times it rivals Pedro Costa’s searching milieu.)

Shirley won the US Dramatic Special Jury Award: Auteur Filmmaking at Sundance earlier this year and is already part of next year’s awards season conversation. Decker’s formally subversive, unrepentantly feminist filmmaking may prove too obtuse for Academy tastes. But, like Shirley Jackson herself, the film is a prickly, intriguing original that doesn’t give a damn what you think.