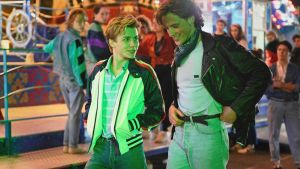 Félix Lefebvre and Benjamin Voisin are stars in the making

François Ozon had hoped to name his 19th feature after The Cure song Summer of 84. When Robert Smith and chums said no, this hormonal teen drama was retitled one year over. We do, however, get In Between Days, Bananarama’s Cruel Summer, Rod Stewart’s Sailing (twice) and a tacky cover of Laura Branigan’s Self Control.

The poppy period soundtrack is in keeping with Ozon’s carefully calibrated script, which flits between puppy love, sunny vistas and death. An opening sequence, in which troubled teen Alex (Félix Lefebvre) is led down a dark corridor by police, suggests that he is the prime suspect in a murder . “I should have known all along,” runs the vaguely hardboiled voiceover. “If your hobby is death, you must be mad.”

Flashbacks return to happier times. Alex’s boat is capsized by a storm but a ripped white knight named David sails to the rescue and brings Alex home to be towelled down by David’s slightly dotty mother (Valeria Bruni-Tedeschi).

The two teens are soon spending every hour together, riding around on David’s motorbike, visiting the funfair and working alongside one another in David’s family shop. Alex, a budding writer, reads from Verlaine’s letters to Rimbaud; David, however, from the get-go, has a roving eye, one that eventually fixes on an English tourist named Kate (Philippine Velge).

Based on the novel Dance on My Grave by Aidan Chambers and a first draft penned by the writer-director some three decades ago, Summer of 85 harks back to Swimming Pool, Sitcom and Ozon’s other earlier, sexier ones, albeit with a coy “behind closed doors” sex scene. (Where is the wild kink of the film-maker’s L’Amant Double?)

The script can sound awfully like a novel (“So we invent the people we love”) but there’s plenty of compensation in the juggling of tragedy and outright comedy: “I heard of a tribe that can lie down and will themselves to death,” says Alex. “I tried for half an hour.”

Lefebvre and Voisin are stars in the making, but Ozon develops supporting characters such as Kate and Alex’s parents in interesting ways. It couldn’t be further from the gravitas of his 2019 clerical abuse drama, By the Grace of God, but Summer of 85 is a pleasing Ozon doodle nonetheless.