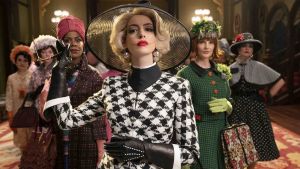 The Witches: faithful final act of this new film from Robert Zemeckis is a surprise following the Looney Tunes shenanigans

Fans of Roald Dahl’s book have cause for cheer. The Witches, a ritzy new adaptation from Warner Brothers now diverted to premium streaming, doesn’t skimp on the British author’s dark musings on mortality.

The faithful final act of this new film from Robert Zemeckis is a surprise following the Looney Tunes shenanigans that have gone before. In stark contrast with Nic Roeg’s much-loved 1990 version, starring a peerless Anjelica Huston as the Grand High Witch, the 2020 film plays the violence and danger for laughs.

Zemeckis has previously crafted classic all-ages movies from the incestuous possibilities of the Grandfather Paradox (Back to the Future) and an isolated man’s projections on a volleyball, so we should not be too surprised that, taken on its own merits, his new film works rather well as a family-friendly companion piece to Death Becomes Her. In common with that anti-anti-ageing satire, with a nod to the madcap animation of Chuck Jones and Tex Avery, The Witches milks its premise for high-jinx and camp value.

The plot – as framed by Chris Rock’s narration – is profoundly, albeit interestingly, altered from Dahl’s 1983 novel in its transportation to the Jim Crow Deep South. In 1960s Alabama, an unnamed orphaned boy (the hugely likeble Jahzir Kadeem Bruno) and his folk remedy dispensing grandma (Octavia Spencer), arrive at a holiday resort only to find a convention of conjurors – under the command of the fiendish Grand High Witch (an outrageously cartoonish Anne Hathaway) – plotting to turn children into mice.

Luckily, neither she nor her crypto-genocidal plans are to be taken entirely seriously. A lot of Tom & Jerry in the Mouse vs Witch standoff ensues, as well as a touch, too, of Black Lives Matter underpinning the clever casting. Spencer is as charming as she is comical, the SFX are fun, and there’s a welcome The Devil Wears Prada nod as Hathaway and Stanley Tucci reunite on screen.

Die-hard fans of the 1990 version may fume, but this Witches is a safer bet for younger Halloweenies.

The Witches is released on October 26th