Director Neil Jordan and star Stephen Rea discuss the making of a masterpiece, 25 years on

'The Crying Game' (1992) directed by Neil Jordan and starring Stephen Rea, Miranda Richardson, Jaye Davidson and Forest Whitaker explores themes of race, gender, nationality, and sexuality against the backdrop of the Troubles in Northern Ireland. 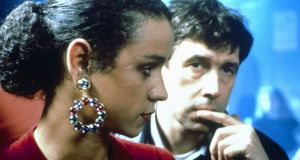 Jaye Davidson and Stephen Rea in The Crying Game. “It’s amazing it happened at all,” says Rea. “When we made it, it was the only film in production in England or Ireland.”

It seems impossible now, but Neil Jordan’s low-budget thriller The Crying Game was a box-office flop when it was initially released in the UK and Ireland 25 years ago. It required our chums across the pond, and a clever Miramax marketing campaign, to turn the film into a major hit and cultural phenomenon before domestic audiences came around.

“People were slightly iffy about it,” recalls Neil Jordan. “As they often are, especially dealing with the issues of political violence and race and gender. But anytime you make a movie that’s about something, anything, there’s a reaction.”

It was only when the film was released in America that it became an enormous sleeper hit, earning more than $60 million at the US box office. There were rave notices from the New York Times (“efficient and ingenious”), Rolling Stone (“darkly funny and deeply affecting”) and Roger Ebert (a film that “involves us deeply in the story, and then it reveals that the story is really about something else altogether”). There was a whole lot of chatter about a certain surprise revelation.

Writer-director Neil Jordan took home the Academy Award for Best Original Screenplay, albeit after a mad dash to the podium: “I was at the bar,” he explains, “And they had changed the running order.”

It was about political violence and terrorism. And gender. The racial aspect was tricky as well. I think it’s amazing how the conversation on those things has moved on

This was not bad for a project that required producer Stephen Woolley to make daily raids on the cash register at the Scala, the cinema he owned and operated in north London, in order to pay the cast and crew.

“It’s amazing it happened at all,” says the film’s star, Rea. “When we made it, it was the only film in production in England or Ireland. It’s unbelievable when you think of how the industry is now.”

“At the time nobody wanted to back it,” says Jordan. “It was about political violence and terrorism. And gender. The racial aspect was tricky as well. I think it’s amazing how the conversation on those things has moved on. The fact the Disney and other major studios now prioritise diversity. Now you can hardly get a film financed if you don’t deal with those themes in some way. It’s a strange turn. And obviously a good thing.”

Given how things have moved on, would he do anything differently now?

“I would have done it differently if I’d have done what the financiers wanted,” says Jordan. “They wanted me to cast a woman that was pretending to be a man. I don’t know how that was supposed to work.”

The Crying Game, for those who have lived under a rock for the past quarter of a century, concerns the kidnap of a black British soldier Jody (Forest Whitaker) by a group of IRA operatives led by Maguire (Adrian Dunbar). Jody forms a bond with Fergus (Rea), one of his captors.

He asks Fergus a favour: if he is killed, could Fergus go to London and look up his girlfriend Dil (Davidson). Fergus is soon bewitched by the soldier’s sweetheart. And then – is there a statue of limitations on spoiler alerts? – comes one of cinema’s greatest twists.

“I went out to dinner with Neil and he told me the story,” recalls Rea. “And once he got to the bit when he said: ‘But she’s a man,’ and I said: ‘I’ll do it.’ People said only an Irish man couldn’t have copped it. But there’s that famous story about Dil getting sick. So a doctor came on set and said: Do you think there’s any chance you could be pregnant?”

Rea has subsequently batted away suggestions from members of the public that the famous revelatory scene was done with prosthetics: “I’ve had guys come up to me and say that. They just didn’t want to believe that they found a male attractive. They look at the final credits and see prosthetics. But those were for the bullet wounds on Miranda Richardson. ”

Stanley Kubrick, among others, had told Jordan it would be impossible to find a black guy who could play a woman. But another filmmaker came to the rescue.

“The person who helped me find Jaye Davidson was Derek Jarman, ” says Jordan. “But I still had to fill the bar Dil works in, and when I began to cast I was talking to transitioning people. They all had the same story. They all met a guy, on the street, wherever. The relationship began. And eventually the relationship moved on sexually, and they had to say: ‘You know I’m a man?’ And the general response was: ‘Oh that’s fine.’ Or, ‘I already knew that.’ And very often the person they met was some Irish paddy hanging around London. That was interesting. A whole subculture that revealed itself.”

Davidson became the first British person of colour to be nominated for an Oscar. A major role as the sun god Ra in the 1994 sci-fi blockbuster Stargate followed. At a special 25th anniversary screening of The Crying Game at the BFI last February, he explained his subsequent early retirement from acting.

“Back then I did not think there were enough roles for black people. And then when you add openly gay black people, that’s the double whammy. So I thought I would be scrambling for the crumbs. And it’s hard to live off crumbs.”

“I was kind of thrilled for him that he made that decision,” says Jordan. “He made that big science fiction movie and then he decided this life wasn’t for him. I thought that was a very brave decision.

“It’s funny. At the anniversary screening at the BFI, he looks just the same, except with a lot more muscle. He was, is, an extraordinary person. But more of a performer than an actor. I’m really glad he avoided being the guy on I’m a Celebrity Get Me Out of Here.”

Did Jordan think of Davidson’s Dil as a pre-op transsexual?

“She wasn’t that. She was a transvestite. And Jaye wasn’t a transvestite, just a beautiful gay man. When I was casting it in London I met a huge variety of people. Making the movie, I met a huge community of what you’d call pre-op transsexuals. I cast some of them. The kid that sings The White Cliffs of Dover was a beautiful boy on a hormone course. But in the end, this is just a love story, a story that asks can anybody love anybody else?”

Rea concurs: “When Fergus first discovers Dil is a boy, he goes into the toilet and vomits. Neil used to say that if it was one of the Italians – De Niro or Pacino – they would have smashed him up. I suppose there’s something odd and touching about the complexity of Fergus’ reaction. It’s a beautiful, tender movie. The relationship is so lovely. That scene when he’s protesting: ‘You’re a man, I can’t handle this’, and Dil says: ‘Kiss me before you go.’ And he does and it’s the most beautiful kiss in the world and he’s in love. That’s so absolutely beautiful.”

Rea hadn’t intended to sit through The Crying Game at the BFI screening but found he was “riveted”.

“I hadn’t watched it in 24 years. I hadn’t seen Jaye since the Oscars. I was far enough away from it that I wasn’t obsessed with my performance or anything like that. I’ll be honest. I said to Neil afterwards: ‘Neil, it’s a masterpiece.’ In terms of the structure, the way he shot it, and the humanity of it, especially given what was going on politically. I’ve done 10 films with Neil now, and this is far and away the best, I think.”

Of those 10 collaborations, The Crying Game is the only one to be namechecked on The Simpsons and Seinfeld, or re-enacted by Leslie Nielsen and Anna Nicole Smith in The Naked Gun 33 1/3: The Final Insult.

“When something goes that far into popular culture it’s weird,” says Jordan. “And then, because that was a time when these issues were becoming more generalised, there was also a whole rake of gender studies papers and MA theses in American universities. The strangest thing was that it was such a big hit. You also think the films you make are going to find an audience. But that was extraordinary.”

Liz Nugent: ‘People have accused me of being brave, but what is brave about surviving?’
6