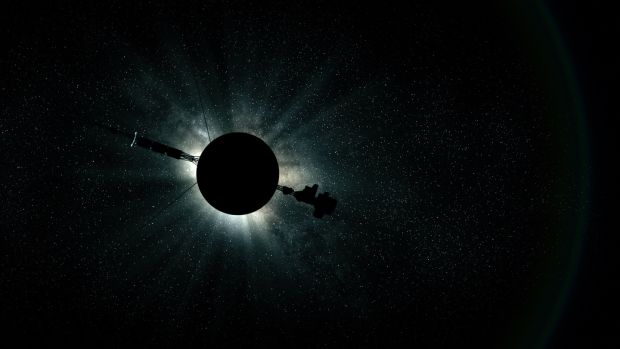 The late Carl Sagan was a bit of a ham. But he was our ham. He was a ham for humanism and logical thinking. At the end of Emer Reynolds’s splendid new documentary, the cosmologist and science populariser appears with the famous photograph of Earth taken as the Voyager spacecraft left the solar system. “If you look at it, you see a dot,” he intones in his fluid Brooklyn vowels. “That’s here. That’s home. That’s us. On it, everyone you ever heard of, every human being who ever lived, lived out their lives. The aggregate of all our joys and sufferings.”

Sagan’s work – notably the TV series Cosmos – expressed the wonder of science without backing away from rigour. He would have greatly liked The Farthest.

Reynolds, a busy Irish editor, who moved into documentary direction with the excellent Here was Cuba, has seamlessly melded the marvellous with the intricate in this study of the Voyager programme. There are “Gee Whiz!” moments by the score. There is also much to be learnt.

The story is told from conception to its current condition of endless incompletion. President Nixon (who seems cuddly in comparison to the current incumbent) approved the plan to launch an unmanned spaceship through the Solar System and then out into the vast unknown. Voyager 1 and Voyager 2 were both launched in 1977. Thirty-five years later Voyager 1 became the first man-made object to enter interstellar space. It continues to travel.

Ditching voiceover, Reynolds allows the witnesses to speak for themselves. The scientists’ abilities to make gripping stories of their contributions and the director’s willingness to knit those chapters together into a coherent saga are key to the film’s success. It flows. It surges.

In one striking moment, a woman describes how, just as she was locking up for the evening, she spotted a relayed image of volcanic eruptions on Io, a moon of Jupiter. She was the first person to see such a thing happen on another world.

Another sequence reminds us that, by today’s standards, the scientists were working with medieval technology. A boffin notes that, in 1977, the juiciest computer in the world was as powerful as an object he carries today in his pocket. You think he’s talking about his smartphone, but he actually means his electronic key fob. The miracles abound.

Reynolds could easily have devoted a documentary to the famous “golden record” alone. Like the decision to photograph “the dot”, the choice to include the record was not driven by science. There is almost no chance of an alien civilisation finding the disc and – following graphic instructions on its mounting – playing the sounds from earth included there: greetings in many languages; Bach’s Brandenburg Concerto; Chuck Berry’s Johnny B Goode; much, much more. But the inclusion speaks of human ambition and imagination. Sadly, the film also reminds us of human stupidity. It scarcely seems possible that correspondents objected to the ship carrying images of naked humans. But that seems to have been the case. (Hilariously, The Farthest gets a PG cert here, partly for “mild nudity”.)

These lighter touches blend with the denser science to create a substantial, but easily digestible, stew. The film is meticulous, epic and – Kate McCullough’s characteristically fine cinematography justifies theatrical distribution – beautiful throughout. What most surprises, however, is how moving The Farthest turns out to be. Our world is so fragile. We are so insignificant. But we can do hugely ambitious and generous things.

“To my mind, there is perhaps no better demonstration of the folly of human conceits than this distant image of our tiny world,” Sagan continued. “It underscores our responsibility to deal more kindly and compassionately with one another and to preserve and cherish that pale blue dot, the only home we’ve ever known.”

A wonderful film that will inform generations to come.