The Big Sick: A romcom that hits all the right notes 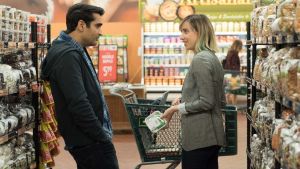 Unlikely lad and lass: Kumail Nanjiani and Zoe Kazan in The Big Sick

The mainstream romantic comedy is dead. It’s with Lubitsch in the grave. After a long spell as one of Hollywood’s most fecund genres, the romcom fell in the early part of this century to the McConaughey 1.01 virus. Or that’s how it looked.

Thank heavens for The Big Sick. Kumail Nanjiani (best known from Silicon Valley) has plundered his own biography to deliver a comedy that, though it follows all the familiar patterns, puts air back in the patient’s lungs. You know how it goes. A couple meet. They like one another. An obstacle imposes itself. They may or may not get past it.

What sets the film apart is an oddness that could only have sprung from real life. That and sincerity, compassion, humanity.

The nervy, passive Nanjiani, co-writing with his wife Emily V Gordon, plays a stand-up comic who shares his own forename. This Kumail is getting by in the Chicago clubs while his Pakistani parents arrange his marriage to a suitable girl from their own community. One night, a perky Wasp (Zoe Kazan), who shares Ms Gordon’s forename, heckles from the audience and the couple begin a friendship that soon turns into a romance.

The first of two obstacles is the more conventional. Like the second-generation protagonists of so many south-Asian immigrant stories– Bend it Like Beckham, East is East, My Beautiful Laundrette, Halal Daddy – Kumail is too accommodated to the new world for his parents’ taste. He keeps the romance a secret.

The second obstacle is altogether stranger. About halfway through, Emily must be placed into a medically induced coma after contracting a serious infection. This actually happened to Ms Gordon. While waiting for her to recover, the fictional Kumail gets to know his girlfriend’s parents: a charming, bumbling Ray Romano and an initially fearsome, but ultimately supportive Holly Hunter.

Among the miracles of The Big Sick is the way it plays to the traditional rhythms while entertaining that most unusual plot turn. The female lead is missing for a good third of the picture, but she feels present throughout.

Poor Michael Showalter brings a light touch to the direction. Most of the credit has, however, gone the way of the two writers and of producer Judd Apatow. After the boring Funny People and the reactionary Trainwreck, Judd has his engine back in gear. The romcom is saved. For the rest of the summer, anyway.