Natalie Portman plays the iconic role of Jacqueline Kennedy, the wife and widow of JFK, in the biopic Jackie 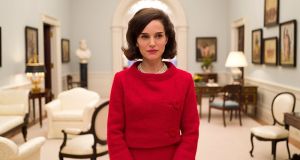 Yes, we do this now. Like everybody else, we knock together a list of the 10 best films in the first half of the year. Give it a while and we’ll be compiling these things on an hourly basis. Best albums since lunchtime. Best novels since I began writing this article.

Where was I? Oh yes. Such film lists tend, when dealing with the opening six months, to be dominated by the second half of Oscar season. There is a bit of that in your current correspondent’s chart. But two of the big players, Manchester by the Sea and La La Land, just failed to make the final list. The eventual best picture winner, Moonlight, is there. It will surely appear on most end-of-year lists aligned to UK and Irish release dates.

A few of our competitors have published their worst films of the year so far. The Irish Times wouldn’t lower itself. We will, however, note that identifying whether CHiPs or Baywatch was the more abysmal TV adaptation is a real angels-on- the-head-of-a-pin conundrum.

So in no particular order . . . hang on. I’ve opened the wrong envelope. La La Land is the winner. I’m not joking.

A searing, poetic meditation on gay and African-American themes. The envelope mix-up distracted from the fact that Moonlight’s victory at the Oscars was one of the greatest upsets in the awards’ history. What else would you expect in the era of Trump, Corbyn and Brexit?

Another critical smash from way out of left field. Jordan Peele’s satirical horror film sends a young black man into a terrifying version of the suburban white plutocracy. Possibly both the best horror film and the best comedy of the year.

The aftermath of JFK’s assassination seen from the perspective of an annihilated first lady. Oblique and poetic, the film profits from Natalie Portman’s eccentric performance. But the MVP is surely Mica Levi’s abstract score.

MY LIFE AS A COURGETTE

Set in a care home for children at risk, this French animation proved to be one of the most optimistic and heartwarming films of the year. There are horrors in here. But My Life as a Courgette reveals a rare confidence in basic human decency.

Now that’s what you call momentum. Florence Pugh is a typhoon of righteous fury in this windy, Northumbrian adaptation of Nikolai Leskov’s Lady Macbeth of the Mtsensk District. We somehow retain sympathy for an anti-hero who does terrible things.

It is a lovely irony that one of YouTube Red’s first high-profile feature acquisitions is a documentary about the cats of Istanbul. That’s right. It’s a cat video. This beautiful tribute to the city and its feline denizens deserves to be seen on the biggest available screen.

One critic described Paul Verhoeven’s troubling rape drama as “the most surprisingly un-booed film” of Cannes 2016. There are definitely uncomfortable turns here, but Isabelle Huppert’s Oscar-nominated performance is impeccable. It will be argued over for decades.

Kleber Mendonça Filho’s sprawling drama concerns an aging music writer bravely resisting efforts to knock down her beachside apartment. Sônia Braga offers one of the great cinematic portrayals of late-life stubbornness. It deserved to win all the awards she didn’t win.

Maren Ade surged forwards after a few under-appreciated dramas to deliver a family comedy that somehow managed to justify its near-epic length. Sandra Hüller is the long-suffering daughter. Peter Simonischek is the embarrassing dad. You’re sure to identify with one or the other.

I AM NOT YOUR NEGRO

Gripping, furious documentary on the deaths of three black activists – Medgar Evers, Malcolm X, Martin Luther King, Jr – told from the perspective of the writer James Baldwin. An extraordinarily disciplined teasing out of the racial tensions that coloured the 1960s.