An Irish comedy about a Muslim abattoir? Pull the other one 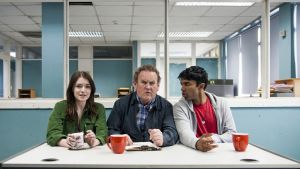 Is everyday decency and human warmth enough to be getting on with? Just about. Conor McDermottroe’s fitful comedy concerning attempts to set up a Halal abattoir in Sligo has both qualities in abundance.

The cast groans with actors we know and love. Halal Daddy is frequently clunky and loses its way badly in a disconnected final act. But it remains charming throughout.

All that’s missing is a comic complication to make the town come alive with incident. That arrives when Raghdan’s dad (the veteran Art Malik) jets in with the notion of transforming a disused abattoir into a going concern to serve the local Muslim community. Raghdan is installed as manager. Maeve’s dad (Colm Meaney with an accent that fails to cross the Shannon) is also part of the supervising team.

The script does, however, touch upon some real social confusions and contemporary absurdities

There is some fearful contrivance to the comedy. Early on, Raghdan and Maeve fall out when he sees her spending time with a local comedy German. He tells her “it” is unacceptable. She can’t see what is wrong with “it”. Anybody who has seen a film before will know they mean something different by “it”. Although Tylak and O’Kane – stylish, talented troopers – do their best, the running gag concerning their characters’ sexual voraciousness feels wearingly dated.

The script, credited to McDermottroe and Mark O’Halloran, does, however, touch upon some real social confusions and contemporary absurdities. Encountering Raghdan after a mysterious absence, O’Kane has fun with the line: “We were beginning to think you’d been radicalised.” There is, at such points, a hint of danger that adds a frisson to an otherwise cosy production.

Such flavours are absent in a closing section that jarringly abandons the central conceit and takes us somewhere else entirely. The film ends even more implausibly than it begins, but it’s still very nice.