The most enjoyable summer blockbuster has arrived

Despicable Me 3 review: Minions, manic laughs and Pharrell Williams chimes in with his boppiest soundtrack to date

The minions are back as Despicable Me 3 featuring Steve Carell and Kristen Wiig opens in cinemas this week. Courtesy: Universal Pictures 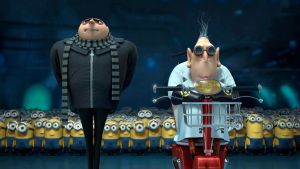 The Ice Age series, which seemed designed to make the viewer pray for mass extinction, stands as a horrific warning against the perils of adding new characters to a successful franchise.

By the same logic, the Despicable Me franchise ought to be sinking. Having acquired three daughters in the first instalment, a wife in the second film, and now a twin brother, Gru, the lovable villain turned Anti Villain League operative, could be weighted down.

Despicable Me 3, however, is such a cleverly calibrated construction that we never notice the extra passengers. Think of it, in terms of quality, as The Good, The Bad and The Ugly of the Despicable Me films. It certainly helps that none of the newer additions is dead wood.

Every character enjoys and explores his or her own bright and breezy story arc. Gru would like to stop his evil nemesis, the former 1980s child star Balthazar Bratt (South Park’s Trey Parker), a character whose many clattering pop cultural references – cue mullet, guitar-synth, and Now That’s What I Call 1980s tunes – coast along, cunningly, as a sly pop against pop-culture references.

Lucy (Kristen Wiig) would like to prove her worth as a mom to the three girls. Agnes, Gru’s youngest, goes on a quest to find a unicorn. Dru – Gru’s billionaire, pig-farming, long-lost twin – would like to tempt Gru back into the family trade: supervillainy. Meanwhile, the minions are rising.

Every scene and plot point is delivered as a set-up and gag. The Minions, having grossed more than $1.1 billion with their 2015 spin-off movie, are wisely accorded greater screen time and more leeway for devilment. Gru, too, retains the mischievousness and infectious cackle that made him such a huge hit in the first place. Pharrell Williams chimes in with his boppiest, catchiest soundtrack to date. That’s all the more impressive considering the competition is his record-breaking toe-tapper Happy.

The most enjoyable of the summer blockbusters has arrived.