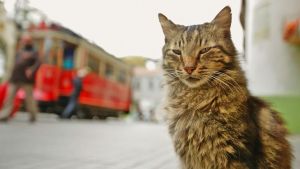 The stray cats of Istanbul have earned their keep for centuries

Duman the gourmand taps at the restaurant window whenever he requires roast beef or – when dieting – smoked cuts and turkey. Psikopat keeps her “husband” close and her dinner even closer. Gamsiz gambols between benefactors, including a kindly baker, in the hippest part of town.

These and other colourful cats are the stars of this gorgeous, engaging documentary, a chronicle and a tribute to Istanbul’s almost worshipful attitude towards its fortunate feline inhabitants.

“Dogs think people are God, but cats don’t,” explains one of the film’s human participants. “Cats know that people act as middlemen to God’s will. They’re not ungrateful. They just know better.”

There are thousands of cats in Istanbul, strolling majestically through the city’s mosques, markets and moorings. The animals have legions of human allies and chums who feed them, water them and take them to the vet. “We all have running tabs at the vet,” explains Gamsiz’s baker chum.

The humans are not named in Ceyda Torun’s film, but they do talk us through the long and fascinating history of cats in the fishing port and the great benefits that come from moggy companionship. “They absorb all your negative energy,” says one shopkeeper. Another interviewee recalls that when his fishing boat was damaged by a storm, a miraculous cat led him towards a lost wallet containing just enough money to cover the necessary repairs.

Fans of LOLcats and internet memes will surely delight in the many kittens featured here. But Kedi – the title simply means “cat” in Turkish – offers bigger, sounder lessons about the ecosystem, too. The stray cats of Istanbul, animals that might easily be rounded up and destroyed in less welcoming places, have earned their keep for centuries. They helped out on fishing boats, chased away the sewer rats of the Ottoman empire and seem to heal those who are lonely or depressed.

Working with cinematographers Charlie Wuppermann and Alp Korfali, director Torun alternates between an ingenious, cat’s-eye view tracking and magnificent aerial shots of the city, all set to a terrific score by Kira Fontana. A purrfect antidote to blockbuster fatigue.

All eyes on Tenet, the spy movie with everything to prove
7 Racism, misogyny, sexual anxiety
8