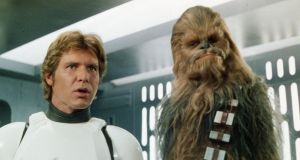 Harrison Ford as Han Solo and Peter Mayhew as Chewbacca in one of the original ‘Star Wars’ films.

The directors of the upcoming Han Solo film have left the production due to “creative differences”.

Film-makers Phil Lord and Christopher Miller had been shooting the as-yet-untitled Star Wars spin-off in London but have now left the project.

Lord and Miller said in a statement on the Star Wars website: “Unfortunately, our vision and process weren’t aligned with our partners on this project.

“We normally aren’t fans of the phrase ‘creative differences’, but for once this cliche is true.

“We are really proud of the amazing and world-class work of our cast and crew.”

Ms Kennedy said: “Phil Lord and Christopher Miller are talented film-makers who have assembled an incredible cast and crew, but it’s become clear that we had different creative visions on this film, and we’ve decided to part ways.

“A new director will be announced soon.”

The film stars Alden Ehrenreich as a young Han Solo, the role made famous by Harrison Ford in the original Star Wars films. It also features Donald Glover as Lando Calrissian.

The film, penned by Star Wars veteran Lawrence Kasdan and his son Jon Kasdan, is expected to explore Solo’s adventures before the events of the first film.

The Han Solo film remains scheduled for a May 2018 release.