Nails review: And you thought Irish hospitals were bad ... 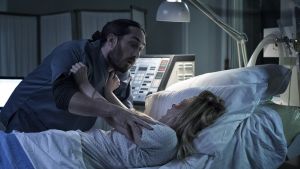 We all know the Irish health service has gone to pot but the centre for medical non-excellence in Nails – replete with holes in the wall and a monster in the cupboard – is just plain silly. And it’s not the only thing.

Mum and jogger Dana (Shauna Macdonald of The Descent) awakens at the implausible facility after a hit-and-run accident leaves her paralysed from the waist down and unable to breathe and talk unaided. It gets worse: Dana soon becomes aware of a malevolent presence creeping around her room at night. Her fears are dismissed as paranoid delusions by her doctor and husband (Steve Wall), but not by Trevor (Ross Noble, the best thing in the film), the kindly orderly.

James Mather’s clever camera angles emphasise the heroine’s loneliness, physical limitations and the vast unseen, potentially monster-occupied spaces that lie just beyond her view. But this interesting psychological dimension is soon eclipsed by an entirely muddled mythology. The monster is a dead serial killer? Who collects fingernails? And who allows Dana to see her husband’s age-inappropriate infidelities? And it’s after her daughter? Huh?

Then the lights go out and the killing starts and the tenuous plotting is entirely forgotten.

Unlike The Babadook or Under the Shadow, Nails fails to satisfactorily link its titular monster and its psychological dimension. Working from a messy screenplay, director and cowriter Dennis Bartok fails to impose order. The actors all seem to be pulling in different directions: Macdonald is a necessarily understated scream queen. Robert O’Mahoney and Charlotte Bradley are channelling the gothic inhabitants of James Whale’s Old Dark House. Ross Noble oozes empathy. And Richard Foster-King’s Schreck-alike creature goes full-on Hellraiser. If only the franchise-friendly monster’s backstory was worthy of his jump-outs.