Review: From a ‘Sex Box’ to a brief shot of Six Nations rugby, this sci-fi film makes for interesting viewing 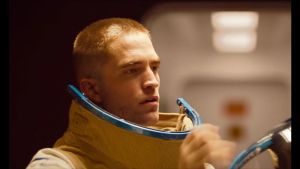 Much has been written about Claire Denis’s dizzying science-fiction puzzler since its premiere last autumn, but nothing caught the attention so much as a tweet from the Toronto International Film Festival. “I left about halfway through the film and threw up in the loos and saw about 20 people walk out – one crying, many shaking. So... that’s High Life,” one punter said.

Really? If you have an issue with bodily fluids then, yes, you may need to visit the lavatory before the abrupt conclusion. It’s safe to assume this is the only 2019 release in which Juliette Binoche carries, in the palms of her hands, a healthy squirt of Robert Pattinson’s semen down a long corridor. But there’s not much else to justify such nausea. You see worse things on Keeping Up with the Kardashians.

This being a Claire Denis film the cast are, nonetheless, put through a fair run of ordeals. Told in typically jumbled form, High Life concerns a party of young people – and some of Binoche’s age – arguing on a spaceship that is headed for a black hole. Initially conceived by Nick Laird and Zadie Smith, now credited to the director and Jean-Pol Fargeau, the screenplay is packed with further backstory, but so haphazard is the telling those details are scarcely worth disentangling. We do know that the passengers are being punished for serious misdeeds. It sounds as if they’re trying to harness the black hole’s energy to save the earth. Sexual activity is prohibited, but Dr Binoche is keen on generating the next generation through artificial insemination.

Unusually for a film-maker of such originality, Denis looks to be making gestures towards specific cinematic predecessors. There is much of Tarkovsky’s Solaris in the main body and the flashbacks – including one on a trundling railway – could be lifted straight from the same director’s Stalker. High Life is, however, stuffed with Denis’ characteristic philosophical derangement.

We are never more than a few minutes away from a scene that leans into absurdity without entertaining any compensatory humour. Binoche’s visit to the “Sex Box” – essentially the Orgasmatron from Woody Allen’s Sleeper – exploits Stuart Staples’s score to unexpectedly bewitching effect. In all this weirdness, nothing is quite so weird as the brief shot of Six Nations rugby (Denis is a fan of that sport).

Designed with an artificial flair that sometimes suggests outer space imagined on stage – the hessian space suits in particular – the picture cannot be faulted for its accumulation of alien unease. It’s a shame that much dialogue has the under-rehearsed, erratically stressed flavour one often gets when a director works outside their own language. It’s more unfortunate still that the arguments remain so frustratingly obtuse.

Still, you almost certainly won’t throw up. Put that on the poster.

Opens on May 10th

Do these pictures look oddly familiar? How an Irish artist’s re-creations are going viral
8

When a writer can’t write, another art form satisfies the creative itch
9

Is Marc Rebillet the funniest man on the planet right now?
Real news has value SUBSCRIBE