Review: The film excels as a character study of singular sensitivity 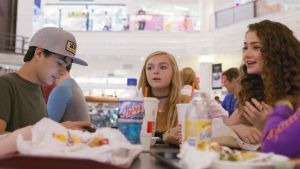 It’s too early to identify a new movement, but a number of recent films are daring to suggest that the American high school (and junior high school, whatever the heck that is) might not be quite so terrifying as American cinema has hitherto argued.

But the threat level has been noticeably lowered. All these films contend – Lady Bird retrospectively – that it may actually be possible to get along in such places without suffering daily dunking by the jocks.

There is just one moment in Eighth Grade when it looks as if things could turn properly nasty, but Burnham has already done such a good job of warming us up that we suspect the worst young Kayla will endure is (yet more) unjustified embarrassment.

Thank goodness. Young Elsie Fisher is so charming as the protagonist that we end up feeling personal responsibility for her wellbeing.

We first meet her engaging with a potential YouTube audience about the sorts of self-advancing things that younger teenagers now care about. She seems tolerably confident and bearably relaxed. The “real” Kayla is much less sure of herself.

As she prepares for the shift to high school proper, she is caught up in all the usual concerns about physical appearance and personal relationships. “Being yourself is not changing yourself to impress someone else,” she says in her video.

Good luck with that. The teenage years have always been characterised by ongoing struggles to become the person you’re not.

There isn’t an enormous amount of plot. Kayla finds herself at a birthday party for one of the cool girls and – after giving a present that doesn’t seem suitably “grown-up” – slinks away in a state of appalled shame. She makes friends with a nice older girl (yes, they do exist in this world) when visiting her new high school. And so on.

Eighth Grade excels, rather, as a character study of singular sensitivity. Burnham and Fisher hit upon too many defining aspects of the young-teen experience to list here. But the actor is particularly good at the words and noises that ape agreement with the bewildering concerns of the older, cooler kids: “Oh yeah, right, sure.”

As in the very different Belgian film Girl, she is lucky enough to have a faultlessly supportive dad, but, like even the most decent kids, she contracts into a taut ball when he tries to connect.

Shot energetically on Red Digital with conspicuous zooms and wide lenses, scored to much electronic dance music, the film offers cinematic correlatives for the chaos of passing childhood. But it is also filled with hope and goodwill. Our own Enya is there with aural balm during the most traumatic moments. As she always will be.