Float Like a Butterfly: An Irish boxing movie that stirs the blood

Review: The story, vaguely inspired by Katie Taylor, is about a Traveller girl who trains herself to boxing excellence 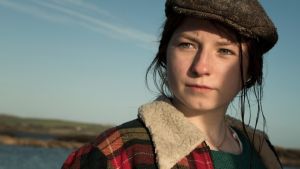 Hazel Doupe is funny, awkward and inspirational in Float Like a Butterfly

Carmel Winters attacks important social issues with a mainstream energy that stirs the blood in her award-winning follow-up to the mysterious Snap. Synopses may give a false impression of Float Like a Butterfly.

Inspired vaguely by Katie Taylor, the picture concerns a young Traveller girl who, a huge fan of Mohammad Ali, trains herself into state of pugilistic excellence. But the film does not follow the pattern of a traditional boxing movie.

Do not expect a steady brawl towards a final fight against the supposedly indestructible champ (at least not in literal terms). Float Like a Butterfly is essentially a road movie that uses boxing as a tonal ingredient, a mode of feminist expression and a potential escape route. This is a film about a girl and her dad.

We begin with a traumatic prologue, set in the mid 1960s, that finds young Frances (Hazel Doupe) losing her mum and seeing her father Michael (the fine Dara Devaney from Klondike) carted off to prison.

Eight years later, Michael comes back to a cautious welcome and children he can’t quite understand. Frances is as tough and rough as gravel. Her brother Patrick (Johnny Collins) is a kinder, gentler soul.

Father and daughter embark on a road trip that takes in matchmaking, an encounter with fairground hawkers and an uncomfortable reunion with Michael’s settled, now mildly bourgeois brother. Frances is constantly at odds with the dipsomaniac Michael – not above giving her a clout – but the connection between them just about holds up.

This is tricky territory, not least because neither director nor star is a Traveller, but, assisted by the community, they create an ambience that buzzes with believable lore and convincing dialogue.

Viewers below a certain age may be surprised to learn that the traditional hand-painted caravans – so beloved of John Hinde postcards – were common as late as the 1970s, and they add a surge of romanticism to a largely sensitive depiction.

The busy cinematographer Michael Lavelle, who did such zesty work on Cardboard Gangsters, finds rich colours in the countryside and gaudier shades in the period clothing.

The film does, however, belong to Doupe. Already an experienced actor at just 17, the Dubliner immerses herself fully in a role that requires intelligence to be balanced with raw determination.

She’s funny, awkward and inspirational. The film does sometimes yaw towards the sentimental, but Doupe’s solidity keeps it on the right course.

Opens on May 10th