New this week: Thor hammers at the funny bone, Andrew Garfield catches his breath, a gay romance and exorcisms 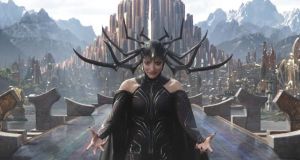 Thor (hilariously offhand Hemsworth) and Hulk (troubled Ruffalo) get stranded on a groovy planet while an angry goddess (utterly fabulous Blanchett) fumes elsewhere. The eccentric Kiwi director Taika Waititi has been set loose on a Marvel property and – praise be! – allowed to do pretty much what he wishes. Working from an unremarkable script by studio regulars, Waititi has layered camp, slapstick madness over every neon-lit, acid-soaked set piece. It’s an absolute hoot for anyone uninterested in “fan service”. Review DC

Serkis’s debut feature tells the stirring story of polio survivor Robin Cavendish (Garfield). Refusing to remain tied to a static ventilator, he eventually developed a portable machine that allowed responauts to move about in wheelchairs. The film is soaked in English good spirits: cricket on the lawn, tea in china cups, cheeky Jack Russell terriers. All that can become exhausting, but the fine cast keeps the film alive. The stiffest-upper-lip film ever made. Review DC

A necessary documentary on something we think we know a little about. Federica Di Giacomo has turned her attention to exorcists in the vicinity of Palermo and to those who believe (or have been persuaded) that they need such assistance. The results are chilling. People who are clearly in need of a psychiatrist’s attention are confronted with the usual waffle and mumbo-jumbo. Or you may think differently. The film allows the audience to draws its own conclusions. Review DC

Iannucci moves from Westminster (The Thick of It) and the White House (Veep) to the aftermath of Stalin’s death for a characteristically grim, fast-paced satire. A terrific cast speaking in a variety of accents trade in fear and cynicism as interlocking plots unfold. The language is heightened. The pace is breathtakingly frantic. A comprehensive rebuttal to those who say comedy cannot be fashioned from the most miserable circumstance. Review/Trailer DC

I AM NOT A WITCH ★★★★
Directed by Rungano Nyoni. Starring Starring Margaret Mulubwa, Margaret Sipaneia. 12A cert, limited release, 92 min

Goebbels: Driven by narcissism and a need for Hitler’s admiration
7

André Rieu: ‘I see a lot of jealousy around me’
8