‘I'd many near escapes of the brutal 1970s education system. I was lucky’

The official trailer for "Grace Jones: Bloodlight and Bami", a documentary looking at the life of performer Grace Jones. Video: Westend Films 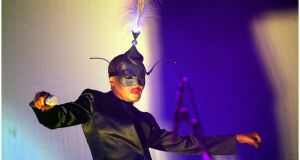 For two nights in September 2016, it seemed as though there were two types of people in Dublin. Those who were lucky enough to land a ticket to one of Grace Jones’s Olympia shows, and those who weren’t.

To say that the former camp was rhapsodical about the gigs is putting it mildly: in fact, social media was ablaze with breathless declarations that the then-68-year-old’s live spectacle was the best. Show. Ever.

Director Sophie Fiennes was there too, but not in the capacity of most others. Footage from the live shows was to become part of a documentary about Jones that Fiennes was directing.

“I didn’t actually see the show as I was sitting in a tiny room, watching it on a screen shouting down [over a microphone] to the cameramen. ‘Camera 4 go wide! Don’t crop her feet off!’ I have to say, when I got the rushes back though . . . it was definitely theatre. I was very aware we had to give her the space to move in a way that’s graphic.”

The resulting documentary, Grace Jones: Bloodlight & Bami, co-produced by Irish production company Blinder Films, is every bit as theatrical as one might expect. Colour-soaked footage from the Olympia shows is spliced with intimate footage of Jones’s off-stage life (the title derives from Jamaican slang for the red light in recording studios and a local type of flatbread).

A lot of straight men find her scary, but a turn on

Fiennes met Jones through the singer’s brother, Noel Jones, a pastor who was the subject of her 2003 documentary Hoover Street Revival. The two kept in touch, and in a casual conversation Jones noted how she was always being approached about being the subject of a documentary. Tentatively, the two began to gather footage “almost as a kind of experiment”.

The world knows Jones as a powerhouse. Her touring rider is already the stuff of legend: on it, you’ll find six bottles of Cristal, lilies and orchids and two dozen unopened oysters (“Grace does her own shucking”). Does Jones’s public persona tally with the private?

“It depends on how you’ve encountered her,” says Fiennes. “For many she’s the doyenne of the disco, but for others it’s a version of ‘ooh, isn’t she mad and scary?’ She’s definitely intense. And exacting and strong. She’s true to herself and that dynamism makes her scary to some.

Fiennes gathered footage of Jones sporadically over five years, and the intimate account is everything a Jones fanatic could hope for. There is luscious, glamorous spectacle. There are Philip Treacy hats and Jasper Conran corsets galore. Those around Jones who get in the way of professional perfection, whether at a gig, studio or TV appearance, occasionally get roared at.

So far, so predictable, yet there is emotional heft in there, too. A family reunion in Jamaica sees Jones reminisce with friends. Later, she watches her own mother Marjorie sing in church, which is a link to a painful backstory. And given that Marjorie died earlier this month, the sequence is all the more poignant.

“I was so happy I captured mother Jones’s relationship with Grace, especially as she was very much of the church and Grace was a total backslider,” says Fiennes. “I’m sad for Grace but I know what a huge part of her life her mother was, and will continue to be.

“I’d contacted Marjorie a while ago, hoping that it wasn’t going to be upsetting to her to see herself in the film, and she said ‘oh no, man!’,” she says, laughing. “She was delighted she’d made it into the film with her song.

“Actually, I started making films properly after my own mother died,” Fiennes adds. “I had a moment of feeling that we’re all mortal, but with film, you’re making a document of something. Film is an immortalising force.”

Fiennes’s illustrious and prolific family often garners as much, if not more, attention than her creative output. Her mother, Jennifer (Jini) Lash, was an author and painter, with roots in the Powerscourt area of Wicklow. Her father Mark, a photographer, had close family ties to Newbridge in Kildare.

Because her father liked to “do up and sell” houses, Fiennes – born Sophia Victoria Twisleton-Wykeham-Fiennes – had a nomadic life with her five siblings: actors Ralph and Joseph, composer Magnus, film director Martha and gamekeeper Jake (they have a foster brother, Michael, an archaeologist).

Fiennes lived in west Cork from the age of five to seven, and then moved to Kilkenny for two years, before the family returned to the UK.

“I love going back there, and when I go to west Cork, all these memories come flooding back,” she says. “In west Cork, very few people had a car, and everyone had a donkey and trap. They’d milk the cows by hand and leave the churns at the top of the lane, waiting for the creamery to turn up.

“When we were filming [the documentary], I drove down to Kilkenny and showed my son the house where we lived when I was seven. I had a ‘boyfriend’, Dessie Coady, and there was a woman standing outside the house. I asked if Dessie Coady still lived there. It turns out he was actually there, because it was his mother’s wake. We had a lot of fun getting up to all sorts of naughty things, climbing rooftops and breaking into the YMCA next door.

I felt very connected to that struggle, even as an English child.

“I also remember learning Irish dancing with an old lady who had no music, but instead she would sing the music herself,” Fiennes adds. “I had many near escapes of the brutal education system of the 1970s. I was lucky. I didn’t get it as brutally as other kids around me.”

Of being English in small-town 1970s Ireland, Fiennes says: “We were very Catholic, or at least my mother was, so that already made us part of the community. I was aware of the politics at the time, and even at that age aware of being English and feeling like I knew that the English had somehow done something terrible. In 1972, it was very charged politically. I felt very connected to that struggle, even as an English child.”

I knew right away that as a girl, you don’t get to play Hamlet

At 14, Fiennes caught The Enigma of Kaspar Hauser on TV while babysitting, and the moment sparked a fateful thought. “It was so different to the ripping yarns my dad and brothers always enjoyed, and this film breathed in a different way. I remember thinking, this is something men do, and I’m a girl, so how can I sneak in there? How can I infiltrate?”

The conversation moves to the allegations of sexual assault and harassment levelled at Harvey Weinstein, and Fiennes recalls as a young girl scratching “actress” off what she calls her bucket list.

“I looked at what actresses had to do and they had to take their clothes off on camera, so that was a no for me. I knew right away that as a girl, you don’t get to play Hamlet.

“I’m surprised that people are so shocked about Weinstein,” she says. “He was always considered a schmuck in business and creatively. He had the nickname ‘Harvey Scissorhands’ because he’d push his way into an edit and would start cutting. He was always a bully.”

Although her preferred milieu is documentary, Fiennes has seen the inner workings of Hollywood at closer range than most. Ralph is the star of the Harry Potter franchise and The Grand Budapest Hotel: Joseph is currently starring in The Handmaid’s Tale.

Has her surname helped open doors in the course of her own career, or whether it has in some way overshadowed her work.

“When you get down to the nuts and bolts of getting [film finance] on the table, it doesn’t matter what your surname is,” she says. “It’s never really meant that much to me. Press-wise, it always gets referred to, and that’s just how that works. I remember getting a fellowship based on my work, and one newspaper wanted to run a headline along the lines of ‘sister of Hollywood star given public money’.

“A lot of assumptions are made, but you kind of just continue on your own path. Besides, I say to my young son, ‘you know how hard uncle Ralph works’.

“The real privilege is getting to talk about film-making with people in my family in the same industry,” she adds. “That’s the bit I find fantastic.”

Isabel Allende: ‘Where are my roots? They are in my books’
6

Netflix: 10 of the best new shows and films to watch in January
10