Grace Jones: ‘You have to be a high-flying bitch sometimes’

Grace Jones Bloodlight and Bami review: Although this biopic is unfocused in parts, the live performances make for spectacular viewing 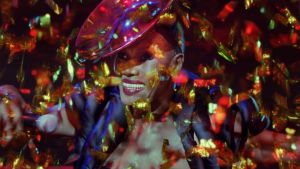 Grace Jones’ occasional rants are not the flighty acts of a diva, they are necessary for her survival

Grace Jones fumbles between a phone and a Filofax before she makes the call. “You’re giving me the run around, Robbie,” she tells Mr Shakespeare (of Sly and Robbie fame), with a tone that falls somewhere between snapping and giggling. It’s a glorious tone. One we’ll encounter again and again.

If you come to Sophie Fiennes’s often wobbly vérité portrait of the artist as an older lady hoping to glimpse the divine Jones hitting the dancefloor of Studio 54, dallying with James Bond in A View to a Kill, or slapping Russell Harty on BBC, then you’ll be sorely disappointed.

Bloodlight and Bami eschews archive footage and biographical chronicle in favour of the contemporary Jones, a grandmother who can hula-hoop through rousing performances of her best-loved hits.

In this spirit, the film cuts between the recording, the stage and the daily grind. Make-up is applied and reapplied across countless scenes. The fabulous hats of Philip Treacy rightly get front-of-film billing. There are lively negotiations when a French TV show surrounds Jones with tacky go-go dancers. “I look like a lesbian madam in a brothel,” she rightly complains. There is a lot of downtime in cars and hotel rooms, especially when an unreliable party fails to cover agreed costs.

This is the business of being Grace Jones. She reminds us and others that these days, she pays for her own recordings. Her occasional rants are not the flighty acts of a diva, they are necessary for her survival: “You have to be a high-flying bitch sometimes,” she says, sagely.

Unhappily, the film becomes unfocused – both structurally and at the level of the shot – when we accompany Jones back to her native Jamaica. At least 20minutes of jittery camera-work around backroads might have been more usefully left on the cutting room floor.

The director’s adherence to the fly-on-the-wall approach can make for pointless pillow shots and often unintelligible overlapping dialogue. It’s a lot of work to decipher the family relationships, even when the subject is Master Patrick (or Mass P), Jones’ grandmother’s abusive second husband.

Against this, the live performances, particularly last year’s concert at Dublin’s Olympia Theatre, are absolutely spectacular. See you down the front.

Eric Clapton opens up – even on his bizarre racist period
6