Deliver Us review: This documentary is a sobering, serious watch about exorcism and those who claim to be possessed 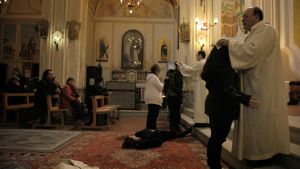 Here is a necessary documentary on something we think we know a little about. Federica Di Giacomo has turned her attention to exorcists in the vicinity of Palermo and to those who believe (or have been persuaded) that they need such assistance.

The film starts quietly as we follow the faithful to an only mildly unusual mass. Fr Cataldo Migliazzo, a burly man who appears to admit no doubt, offers advice to those with angry children and troublesome ailments. The guidance invariably touches on insufficient faith. As the film progresses, we see the subjects acting out the archetypal manifestations of possession. They growl. They shout obscenities. They curl into knotted contortions.

The casual viewer will surely remark on the similarities to Linda Blair’s performance in The Exorcist and wonder who is imitating whom. Indeed, in one telling moment, two priests ask whether, having begun in a state of genuine possession, the subjects may have become too fond of the attention. “You will not relieve me until I roll on the floor and kick chairs,” one unfortunate fellow says.

The film-makers push us in no particular direction, but most will take the rational view that the supposedly possessed are a mix of people with possible schizophrenia, severe depressives and religiously indoctrinated. They need psychiatric care and medication, not the attention of self-adoring mumbo-jumbo merchants.

Di Giacomo tells her story in restrained, disciplined fashion. The camera stays politely back as the film’s subjects fall into states of dangerous mania. There is no voice over. We learn little about the characters beyond the traumas that have brought them to the exorcist. The film does, however, have a well-purposed shape. We end at a disconcertingly ordinary convention – chips and peas in the canteen – for exorcists from all over the world. A closing message tells us that the parishes are crying out for their services. As if the world wasn’t already ghastly enough.