My Oscars 2021 tips: One of these 10 will win next year’s best picture award

Last year we scored four out of nine without seeing a frame. That’s not to be snorted at 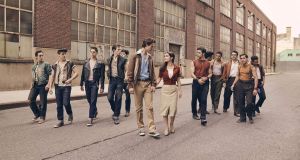 Hooray. Hail the last bellow of awards season. It’s our most popular and pointless annual feature (probably). Last year’s attempt to guess the best picture nominees from 11 months’ remove was reasonably fruitful. Be fair. Scoring four out of nine when nobody had seen a frame from any of those releases was not to be snorted at. The picks that converted were Once Upon a Time in… Hollywood (Tarantino, duh!), The Irishman (Scorsese, duh!), Little Women (Gerwig, new-generation duh!) and Le Mans ’66 (James Mangold, borderline duh!). Hey, we never pretended we weren’t taking shots at the widest barndoors with the biggest blunderbusses.

What did we get wrong? Neither of the then-recent Sundance hits — The Farewell, The Report — scored with voters. The Personal History of David Copperfield wasn’t released in the US in time for the Oscars (we’d love to include it again, but a May release suggests no awards push). Someone claimed we included Cats in the 10, but you’ll have to look that up for yourself. I can’t remember and I haven’t got all bleeding day.

Anyway, the lesson is: play it safe, buddy. Of course, we’ve included the Spielberg film. Did you think we weren’t going to list the David Fincher epic? Get real.

The great imponderables are the films that may or may nor not finish in time. If we could count on the new Paul Thomas Anderson flick and the next Jonathan Glazer drama arriving in 2020 they’d be here. But we can’t, so they’re not.

In no particular order...

Directed by Steven Spielberg
Look, if Spielberg were directing a Teletubbies movie we’d be including it in our speculations. There has already been some snootiness about this remake, but, given they revive the show all the time on Broadway, why complain about a cinematic disinterment? We’re told the casting is more ethnically sensitive. Does that make Ansel Elgort Italian? Rita Moreno returns from the 1961 film. Tony Kushner of Angels in America reworks the script.

Directed by David Fincher
The great Netflix debate starts again. Fincher directs Gary Oldman as Herman “Mank” Mankiewicz in an examination of that writer’s work on the script for Citizen Kane. Tom Burke, so brilliant in The Souvenir, is sound casting for Orson Welles. The film looks to have “Oscar” written all over it. Mind you, given Netflix’s recent adventure — 24 nominations and just two wins — it more probably has just “Oscar nomination” written all over it. See other Netflix joints below.

Directed by Wes Anderson
Calm down Saoirse fans. She has revealed that — like so many among the dozens of starry names listed — she appears only briefly in Anderson’s yarn concerning American journalists in France. So, no Oscar nomination for her here. Anderson’s last live action film, The Grand Budapest Hotel was all over the Academy Awards and we fully expect the new one to register with similar force. Del Toro? Swinton? Seydoux? Murray? It’s easier to list who’s not in it. Nearly certain to premiere in Cannes.

Directed by Lee Isaac Chung
We always have at least one film that’s already screened at Sundance. Both of last year’s picks spun out at the close, but A24, top Oscar-whispering distributors, will have hopes for Lee Isaac Chung’s tale of a Korean-American boy relocating from the West Coast to Arkansas. Winner of the Grand Jury prize at the snowy industry festival and recipient of many glowing notices. “Told with the rugged tenderness of a Flannery O’Connor novel,” IndieWire noted.

THE TRIAL OF THE CHICAGO 7

Directed by Aaron Sorkin
The title and director alone tell you that Paramount are aiming for Oscar attention. Sorkin’s latest film — from his own screenplay obviously — casts Sacha Baron Cohen as inspirational “yippie” Abbie Hoffman in a study of the attempts to shut down dissent before the fractious 1968 Democratic National Convention. Eddie Redmayne, William Hurt and Joseph Gordon-Levitt are among those queueing up to play other historical figures. Sorkin’s directorial debut Molly’s Game wasn’t great, but even that got nominations.

Directed by Andrew Dominik
Joyce Carol Oates’s much-admired interior study of Marilyn Monroe becomes a drama by a filmmaker who, though much admired by critics, has rarely scored with awards voters or paying audiences. The director of The Assassination of Jesse James by the Coward Robert Ford has cast up-and-comer Ana de Armas as Monroe (some shoes to fill!), Adrien Brody as Arthur Miller and Bobby Cannavale as Joe DiMaggio. Phew! Another Netflix baby.

Directed by Christopher Nolan
They expanded the Oscar nominations to include Nolan and he probably came close to a win with Dunkirk. His latest is — if the trailer is any measure — a return to more characteristic material. Nobody knows what’s going on in the plot yet (and possibly not when the film emerges), but John David Washington and Robert Pattinson look to be walking up walls and travelling through time. You know? Like in a Chris Nolan film. Due in July.

Directed by Ron Howard
It’s been a while since Howard scored with Oscar voters, but we’d be foolish to bet against industry royalty. Look at the cast for starters. Amy Adams and Glenn Close — jointly the most “overdue” actresses in the Oscar crucible — star in a take on JD Vance’s memoir of growing up in rural Ohio. If this were the 1980s it would read like a certainty for awards, but might it be a tad old hat now? Another release from a streaming giant whose name begins with “n”.

Directed by Denis Villeneuve
Yeah, I know. Blade Runner 2049 was something of a financial catastrophe and registered only in technical categories with awards panels. This is still a proper epic from a respected filmmaker who scored multiple nominations with the fine Arrival. Timothée Chalamet and Rebecca Ferguson star in an adaptation of the durable space opera by Frank Herbert. Opens at Christmas and box office returns may matter as much as reviews to the Academy.

Directed by Leos Carax
Allow us this one indulgence. Allow our heart to rule over our head for a last desperate entry. After all, you’d have laughed no less loudly if we selected Parasite last year. Carax’s long-delayed follow-up to the wonderful Holy Motors features Adam Driver and Marion Cotillard in a musical fantasy with tunes by the immortal Ron and Russell Mael of Sparx. The Cannes Cult is preying that it triumphs there in May. You never know (you probably do, alas).