Mother’s Day: Ten of the best and worst moms in cinema

The fanatical mother of Carrie, the self-sacrificing Mildred Pierce, the baddass Sarah Connor 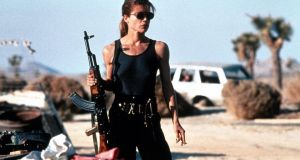 Sarah Connor, mother to future revolutionary John Connor, surely scores as the most impressively ‘badass’ mom of the modern era

There was some competition between Bambi’s mother and the elephant’s mistreated parent for this spot, but, with the best will in the world, the female deer doesn’t get much to do except (spoiler alert, if you’ve been asleep forever) die in heart-rending fashion. Poor old Mrs Jumbo is at the centre of the story. She defends her big-eared kid from bullies and gets labelled a “mad elephant” for her pains. Baby Mine is arguably the most moving of all Disney’s musical interludes. The current remake is only so-so. GOOD MOM!

“A very strong character?” Jerry (Paul Henreid) remarks diplomatically when the damaged Charlotte Vale (Bette Davis) shows him a photograph of her terrifying mother. He doesn’t know the half of it. “My daughter Charlotte is no more ill than a moulting canary!” Mrs Vale (Gladys Cooper) tells a doctor as the poor girl teeters towards a nervous breakdown. Dame Gladys provides cinema’s ultimate take on the lonely mum who infantilises a daughter to keep her from leaving the nest. BAD MOM!

Joan Crawford had, to say the least, a complex relationship with motherhood. The actor’s alleged abuse of her own children was immortalised by a full-strength Faye Dunaway in Frank Perry’s camp classic Mommie Dearest (1981). It is, thus, ironic that her greatest role was as the long-suffering, pie-baking, self-sacrificing parent to horrible Ann Blyth in Michael “Casablanca” Curtiz’s untouchable melodrama. Later played by Kate Winslet in Todd Haynes’s stately TV series. GOOD MOM!

What was it Tom Lehrer sang in Oedipus Rex? “So be sweet and kind to mother/ Now and then have a chat … But maybe you had better let it go at that.” The relationship between indoctrinated Korean War veteran Raymond Shaw (Laurence Harvey) and his ghastly mother Eleanor Iselin (Angela Lansbury) never quite verges on the sexual, but it remains eerily intimate throughout. Mind you, Lansbury was just three years younger than Harvey. She could still play the role today. One of the great paranoid thrillers. BAD MOM!

We all know that William Friedkin’s hugely successful horror (amazingly, not banned in Ireland) has to do with possession and the challenges of retaining faith in a secular age. It’s also the story of a mother fighting to protect her daughter under apocalyptic pressure. Ellen Burstyn was Oscar-nominated as the movie star who watches a child succumb to foul-mouthed derangement while the devil takes over. The parallels with everyday parenting were unmistakable. See also The Babadook and The Omen. GOOD MOM!

You could view Piper Laurie in Brian De Palma’s horror classic as the antithesis of Ellen Burstyn in The Exorcist. Margaret White is a religious maniac who views menstruation as a manifestation of sinful thoughts. If anything, her crazed misuse of Carrie (Sissy Spacek) pushes the unfortunate girl towards ever-greater supernatural excesses. She’ll regret it. She’ll regret it. The first of many Stephen King adaptations. BAD MOM!

The word “badass” is among the era’s most overused. If we must play by those rules then Sarah Connor, mother to future revolutionary John Connor, surely scores as the most impressively “badass” mom of the modern era. Linda Hamilton protected herself bravely in the first film; the sequel saw her grab pump-action shotgun and bandolier in defence of her threatened offspring. Turned up in a few sequels. Played wanly by Emilia Clarke in Terminator Genisys. But this is prime Sarah. GOOD MOM!

Nobody could describe Lee Daniels’s study of a grim life in 1980s Harlem as under-cooked. The picture buzzes with gothic levels of cruelty and unease. Gabourey Sidibe was endlessly touching as a teenage girl trying to break out of poverty. Mariah Carey surprised as her social work. But Mo’Nique took the Oscar for her frame-bursting turn as a mother whose cruelty is exceeded by only her indolence. Despite not even bothering to campaign for the award, she won by many lengths. BAD MOM!

Then still in his mid-twenties, Xavier Dolan, the Quebecois wunderkind, reached the apex of his young career with this powerful, funny melodrama - shot almost entirely in a unique square ratio - concerning a mum coping indifferently with a disruptive teenage son. The brilliant Anne Dorval creates a character who remains courageous - and fun - without ever giving in to sainthood. Deserved all the awards it didn’t get. GOOD MOM!

Brie Larson got to stretch every acting muscle – defiant, caring, depressed, resilient – in her turn as a mother raising a son in captivity after being abducted by an abusive maniac. The interplay between Larson and young Jason Tremblay confirms how a close human connection can offer comfort in even the harshest circumstances. Lenny Abrahamson directed Larson to a best actress Oscar. She has not looked back. GOOD MOM!