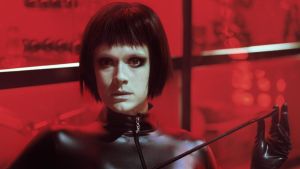 Although he saves lives at work ever since his wife drowned on a lakeside holiday the death instinct is strong in cardiothoracic surgeon Juha (Tom of Finland’s Pekka Strang).

Not long after, he’s smashing windows at work and forgetting all about his daughter in pursuit of Mona and her services. It’s a descent, but to where?

This dark romantic comedy from Finland and the Director’s Fortnight at Cannes features toenail removal, whipping, strangling, and some business with a tooth that’s guaranteed to make your eyes water. Yet beneath the body harness, lurks a good-natured and sweet-hearted rom-com and beneath the rubber bodysuit, there’s a Manic Pixie Dream Girl, albeit one who makes customers howl with burning wax.

Striking a careful balance between body positivity and humour, consent and kink, Dogs Don’t Wear Pants creates a rabbit-hole bondage fantasia to counterpoint Juha’s muted, humdrum existence. The subterranean dungeon and club he visits may be neon-lit and sleekly seedy – Pietari Peltola’s cinematography has fun with vinyl – but the patrons are ordinary folk ordering drinks and passing pleasantries.

The script, co-written by the director and Juhana Lumme, is simple and elegant. Huhta and Kosonen have terrific chemistry, enough to burn up the screen even when the latter is barking orders and doing her worst.

Where was J-P Valkeapää when Hollywood was making those dreary Fifty Shades pictures?