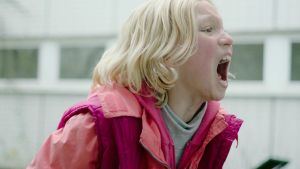 Little cries of dismay rang out around the press room at last year’s European Film Awards when Olivia Colman was named Best Actress. It’s not that anyone found fault with The Favourite star; it’s just that many of the corps were rooting for Helena Zengel, the commanding young actor at the heart of System Crasher.

Minutes in to Nora Fingscheidt’s Silver Bear-winning drama, Zengel’s young troubled heroine lets out the first of many shrieks. It’s a sound emblematic of the film’s grander impact. This is a wail that you won’t forget.

The title is an informal term given to children who slip through the cracks of the German Child Protective Services; kids who are too disruptive for either group homes or foster care; kids like Benni (Helena Zengel), who is not yet 10 but is already running out of places to go.

Benni desperately wants to live with her mother Bianca (Lisa Hagmeister), but an unscheduled home visit begins with neglect and ends in violence. What we learn of Benni’s past, in particular the reason her face can’t be touched, is troubling. Occasionally, her past traumas visually spill onto the screen as an overload of pink mist and jump-cuts set to John Gürtler’s careening, impulsive score.

Between the outbursts and the fights, Benni is a lovely kid who craves affection. Her case worker, Maria (Gabriela Maria Schmeide), her former foster mother Silvia (Victoria Trauttmansdorff), and her school escort Micha (Albrecht Schuch), are all fond of her. When she smiles, it lights up her face; when she hugs, she squeezes tight.

Determined to break her out of the cycle of bouncing from one exasperated carer to another, Micha takes Benni on a rural retreat. But hers is a complicated case and there are no easy solutions here.

Writer-director Fingscheidt comes from a documentary background and spent years researching the carefully constructed, sympathetic script. This is a wildly impressive first narrative feature, powered along by a strong cast, great chemistry, virtuoso flourishes, and fierce energy. Parents struggling with newfound home-schooling duties and frayed nerves might like to watch and thank their lucky stars.