‘I can only do what feels right’: Emma Thompson goes public on John Lasseter

‘Centuries of entitlement’ is not going to change overnight, says the actor in an open letter 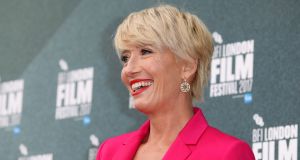 When the actor Emma Thompson quit the forthcoming animation Luck last month, many assumed it was because John Lasseter had been announced as the new head of Skydance Media, the production company behind the film. This was confirmed by her publicist, but a letter shared with the Los Angeles Times on Tuesday makes plain Thompson’s level of discomfort.

In it, she raises questions about the ethical implications of working with Lasseter, who left Pixar last year following multiple allegations of inappropriate behaviour. Her implication is that Lasseter’s admitting to “inappropriate hugging” and “other missteps” was insufficient, and that it would be reasonable for women who now work with him to question whether he would act appropriately because he realised the error of his ways or because it was politic to do so.

Thompson concludes by expressing regret about quitting the production, but determining the alternative would be irresponsible for someone in her position.

“I am well aware that centuries of entitlement to women’s bodies whether they like it or not is not going to change overnight. Or in a year,” she writes. “But I am also aware that if people who have spoken out – like me – do not take this sort of a stand then things are very unlikely to change at anything like the pace required to protect my daughter’s generation.”

The full text of Thompson’s letter is below:

As you know, I have pulled out of the production of Luck – to be directed by the very wonderful Alessandro Carloni. It feels very odd to me that you and your company would consider hiring someone with Mr Lasseter’s pattern of misconduct given the present climate in which people with the kind of power that you have can reasonably be expected to step up to the plate.

I realise that the situation – involving as it does many human beings – is complicated. However these are the questions I would like to ask:

- If a man has been touching women inappropriately for decades, why would a woman want to work for him if the only reason he’s not touching them inappropriately now is that it says in his contract that he must behave “professionally”?

- If a man has made women at his companies feel undervalued and disrespected for decades, why should the women at his new company think that any respect he shows them is anything other than an act that he’s required to perform by his coach, his therapist and his employment agreement? The message seems to be, “I am learning to feel respect for women so please be patient while I work on it. It’s not easy.”

- Skydance has revealed that no women received settlements from Pixar or Disney as a result of being harassed by John Lasseter. But given all the abuse that’s been heaped on women who have come forward to make accusations against powerful men, do we really think that no settlements means that there was no harassment or no hostile work environment? Are we supposed to feel comforted that women who feel that their careers were derailed by working for Lasseter DIDN’T receive money?

I hope these queries make the level of my discomfort understandable. I regret having to step away because I love Alessandro so much and think he is an incredibly creative director. But I can only do what feels right during these difficult times of transition and collective consciousness raising.

I am well aware that centuries of entitlement to women’s bodies whether they like it or not is not going to change overnight. Or in a year. But I am also aware that if people who have spoken out – like me – do not take this sort of a stand then things are very unlikely to change at anything like the pace required to protect my daughter’s generation.

‘We are the weirdoes, mister’: Why women love witches
5

Monty Python hits Netflix. Here’s what to watch and avoid
6

Saoirse Ronan: ‘I never got cast for my looks’
Real news has value SUBSCRIBE