They fixed the Oscars! Or did they just get harder to predict? 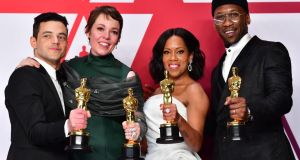 Think back to the most boring years of the Academy Awards. It is the 1980s, and the ceremony is dominated by Oscar bait such as Out of Africa and Driving Miss Daisy.

If you woke an average viewer and told them that, in 2019, three of the four acting awards would go to people of colour and that a monochrome Mexican film would win best director, they might have allowed themselves to feel hopeful for the coming century.

I’m snakebit. Every time someone’s driving somebody, I lose. I thought I was courtside at the Garden and the refs made a bad call

That depends upon where you stand. When Peter Farrelly’s Green Book, an indifferent film characterised by lazy racial politics, won best picture, Spike Lee was seen throwing his hands in the air and making for the exit. In the press room he remembered Do the Right Thing, his breakthrough film, losing best picture to Driving Miss Daisy 29 years ago.

Both that cosy drama and Green Book find a white person and an African-American person bonding during a road trip. “I’m snakebit. Every time someone’s driving somebody, I lose,” Lee later said. “I thought I was courtside at the Garden and the refs made a bad call.” Lee was, nonetheless, irrepressibly delighted to have won best adapted screenplay for BlacKkKlansman.

Green Book’s win confirmed at least one golden rule of Oscarology: never dismiss the winner of the People’s Choice Award at Toronto International Film Festival. The film was on nobody’s radar when it premiered there in September.

Following Viggo Mortensen’s wise guy as he drives Mahershala Ali’s prim pianist about the segregated south, it secured standing ovations, took that influential award and prompted the bookies to tighten their odds, but it still looked less likely to triumph at the Oscars than Alfonso Cuarón’s Roma.

The Mexican film, about a middle-class family’s traumas during the 1970s, was widely tipped to be the first “foreign language” picture and the first Netflix release to take the top prize. After all, Farrelly wasn’t nominated for best director, and only two films had won best film without that citation since 1990. The intelligence that the earlier of the two was Driving Miss Daisy should have been read as an omen.

You would have got still longer odds on Bohemian Rhapsody winning the most Oscars. Yet that’s what happened. The indifferently reviewed biopic of Freddie Mercury became soaked in controversy even before shooting had finished. Bryan Singer, nominally the director, was sacked midproduction and was later forced to deny accusations of sexual misconduct. His name went unmentioned on stage following each of the film’s four wins. There was much respect for Rami Malek, dignified winner of best actor for playing Mercury, but a certain strain of Oscar watcher bristled at Bohemian Rhapsody’s bizarre triumph.

Others rejoiced. Of course they did. The Queen film took more than €750 million and confirmed the musical genre as a commercial force. What has happened to the Oscars is more complex than our 1980s person may have initially understood.

We are often told that, in the Trump era, there are two United States and that they don’t much like one another. That is true of the academy as well

Recent, deliberate alterations to the academy’s membership – making it more diverse, younger and less American – have allowed odder films such as Roma and Yorgos Lanthimos’s The Favourite, an Irish production for Element Pictures, to make headway at the once dusty awards. Those two films topped the nominations chart, with 10 each.

But a more conservative, more mainstream cadre within the academy is resolved to make its presence felt. We are often told that, in the Trump era, there are two United States and that they don’t much like one another. That is true of the academy as well. The red states vote for Green Book and Bohemian Rhapsody. The blue states vote for BlacKkKlansman and The Favourite.

All this churn does have the superficially positive effect of making the awards harder to predict. In the past few years Spotlight, Moonlight and Green Book were all upsets of various dimensions.

The ups and downs of The Favourite on Sunday night remain baffling. The delightful, off-centre historical comedy – detailing disputes at the court of Queen Anne – was expected to pick up awards for costumes, production design and screenplay, but best actress looked nailed down for the criminally overdue Glenn Close.

When The Favourite lost those early awards it seemed destined to join the small, unhappy band of films – the last being the Coens’ True Grit – to secure 10 or more nominations without achieving a single win. Did voters not care for the picture after all? Colman’s triumph in a notably competitive category put that theory to bed. The Oscarologists will be chewing over those results for years to come.

The shocks and twists helped boost a show that, coming after months of unnecessary controversy, went off better than many had feared. After failing to relegate certain awards to the commercial breaks, the organisers could have ended up with another overlong behemoth. But the ceremony was nippy, efficient and amusing.

It was useful that, for the first time since 1989, the show proceeded without a formal host. The snarky opening turn from Tina Fey, Amy Poehler and Maya Rudolph referenced the recent controversies without the event disappearing too far up its own interior. Lady Gaga and Bradley Cooper’s performance of Shallow – winner of best original song – was so unsettlingly intimate one felt uncomfortable watching from a mere 8,000km away. Get a room, guys.

Some familiar kerfuffles did reappear. There has never been an in-memoriam tribute without some important name being left off. This year viewers wondered what had become of the actors Verne Troyer, Carol Channing and Dick Miller. The academy would point out that Stanley Donen, director of the immortal Singin’ in the Rain, had died only a day earlier, but the technology is surely there to add such names at the last minute.

The least significant consequence of those unexpected swerves was a poor record in predictions for The Irish Times. This is our final opportunity to remind readers that in 2018 we guessed 21 out of 24 awards correctly. This year it was a pathetic 12 out of 24.

Oh well. We’re glad everyone had fun, and we begrudge Olivia Colman not an ounce of her joy.

Why did reporter Christine Chubbuck shoot herself live on air?
4

The sad, secret life of Whitney Houston
7 Welcome to the child sex capital of Europe
8

‘Jennifer Aniston cried in my lap’: the inside story of Friends
10