The Hole in the Ground: It’s a scary, starey Irish horror

Review: Seána Kerslake fires on all emotions in a film that could flatten a lesser actor 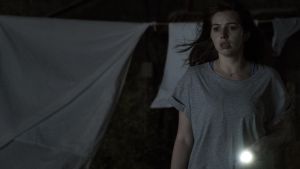 Seána Kerslake has a gift for generating empathy from unhinged energy

Film Title: The Hole in the Ground

Lee Cronin certainly lays out his stall in the opening scenes of his debut feature. The drone shots of a car driving through wooded exterior point towards Stanley Kubrick’s The Shining. Sure enough, children will endure possession in remoter parts of the countryside.

There are more clues as to what’s afoot in an early sequence that finds Sarah (Seána Kerslake) and Chris (James Quinn Markey), her nervy son, enjoying malarkey in a hall of distorted mirrors (do such things still exist?).

The weird reflections hint at looming personality eruptions. You’ve seen The Babadook and We Need to Talk About Kevin. You know how the pressures of child rearing provide the material for psychological horror. But that sequence signifies something else.

Sarah and Chris are, it seems, in an old-school carnival and – though it has things to say about contemporary familial pressures – The Hole in the Ground is trading primarily in mainstream genre scares. Not for nothing did Cronin’s title his best-known short Ghost Train.

The Hole in the Ground is here to lower the lights, dial up the tension and rest a skeletal hand on your unsuspecting shoulder. It’s not enormously subtle. It’s not hugely original. But fulfils its remit as successfully as any recent domestic horror.

Recently escaped from an abusive relationship, Sarah is relocating to the countryside with a mind to starting a new life and nudging those past traumas behind her. Good luck with that.

Cronin is not going for the long, slow build here. Within minutes we have been fed a whole month’s worth of effective horror tropes. Reflecting the presence of Finnish co-producers, Kati Outinen, a long-time collaborator of Aki Kaurismaki, appears to stare malevolently at the newcomers.

Referred to locally as “walkie-talkie” for her habit of muttering enigmatic nonsense to the earth and sky, she flings herself at the car and offers a garbled warning about the lad’s identity. “It’s not your boy!”

There are rumours about the town. The house is shrouded in sepulchral gloom. And then there’s the eponymous hole in the woods. This is no slim, leaf-shrouded orifice. The hole looks more like the one created by that asteroid in Russia before the first World War. It’s enormous.

Cronin leaves us in little doubt that we’re not in the everyday universe.

Mother and son play out uncomfortable rhythms until Chris goes missing in the area of the crater. When he returns he is severely changed. He was a nice enough boy. Now he’s the sort of scary, starey child we met on VHS boxes during the 1980s. Only Sarah is certain something fundamental has been altered.

Cronin does throw too much at us too quickly. The weirdness needs a little more reality to set it into proper relief. His handling of the horror machinery is, however, masterful for one with such limited experience. The build from mayhem to much more mayhem is sustained with relish.

Stephen McKeon’s spooky music helps twists the screw. Cinematographer Tom Comerford, who has done such good work on Michael Inside and Pilgrimage, finds enough shades in his deadened, smoky palette to generate variety among the omnipresent gloom.

The Most Valuable Player in the operation is almost certainly Kerslake. A lot is asked of her. We are expected to wonder if, perhaps, the weird manifestations are all in her head. We are simultaneously supposed to sympathise with her increasing distress.

As she proved in A Date for Mad Mary, the Dubliner has a gift for generating empathy from unhinged energy. She hits the entire spectrum of emotions during a series of trials that could flatten a lesser actor.

A strong exercise in a familiar genre.