Dublin International Film Festival: Composer David Shire on his life in the movies 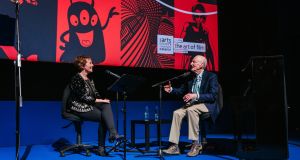 Composer David Shire talks to Aedín Gormley at the Light House cinema about his life in the movies. Photograph: Simon Lazewski

The Virgin Media Dublin International Film Festival welcomed two legends back to the city – one a home boy, the other a late Englishman of Irish descent. Alfred Hitchcock’s version of Sean O’Casey’s Juno and the Paycock has long seemed an oddity in the director’s early canon. Released in 1930, directly after his early sound smash Blackmail, the picture saw Hitch taking a rare (though not unprecedented) swerve away from the suspense genre. The film is occasionally revived. It appears in footnotes. But few film experts rate it high in the Hitchcock hit parade. O’Casey aficionados rarely praise it to the rooftops.

The project remains under-investigated and it was great to learn more from Brian O’Flaherty’s rigorous, well-researched When Hitchcock Met O’Casey. Premiering at the The Light House Cinema on Thursday night, the documentary gathers together a collection of wise voices to tease apart this fascinating project. We learn that Hitch never felt entirely happy with the result. We learn why some Irish actors made it in – Barry Fitzgerald secured his film debut here almost by accident – and why most were left behind in Dublin.

Joe Mooney of the East Wall History Group was interesting on the political differences between the two men. “When you’re talking about Hitchock and O’Casey you’re talking about two people who are at opposite ends of the political spectrum,” he said. “You look at movies like Torn Curtain and Topaz. They would have had anti-communist undertones. Here you had him working with Sean O’Casey who was an avowed socialist and later a communist.”

The actor Neili Conroy was also on hand to discuss the play’s continuing importance to the city. “It was the first time that realism was brought on to the Irish stage,” she said. “The voices from just down the road.”

Hitchcock has enough affection for the playwright to include a version of him – caricatured as a barroom eccentric – in his much later film The Birds.

The Light House also played host to a conversation – interrupted by occasional performance – from the great cinema composer David Shire. Aedín Gormley, host of Movies and Musicals on RTE Lyric FM, talked Shire through a lifetime of incident and glamour. There were joined by vocalist Suzanne Savage and saxophonist Catherine Sekora for performances of scores such as those for The Conversation and All the President’s Men, and of his Oscar-winning song It Goes Like it Goes.

He spoke about his collaborations with directors such as sometime brother-in-law Francis Ford Coppola to the younger David Fincher. Shire also talked amusingly about working with Barbra Streisand, his night at the Oscars, working with different lyricists and about how jazz took over from bigger orchestral film scores in the 1970s. There was much applause for his wife Didi Conn, star of Grease and recent participant in Dancing on Ice. “He’s such a lovely man,” Gormley told The Irish Times.

Three to catch at DIFF

The latest film from Sergei Loznitsa – the Ukrainian director of diversely miserable films such as My Joy and A Gentle Creature – begins with scenes that will resonate with adventurous viewers throughout the world. We meet a bunch of citizens apparently preparing for a film shoot. We appear to be in a recreation of a warzone. The work under construction is, in fact, an elaborate fake news segment focussing on supposed survivors of a “fascist” assault. The film’s internal truth turns out to be more horrible than that invented by the journalistic fraudsters.

A film-maker of no little ambition, Loznitsa constructs his film in form of 13 equally cynical, comparably despairing vignettes. The unavoidable topic is the conflict between Ukrainian nationalists and Russia’s proxy Donetsk “People’s Republic” in eastern Ukraine. As is the way of anthology films, some segments work more effectively than others. But the desire to spread plague about both houses is maintained with impressive rigour throughout. There has rarely been a better example of universal truths being revealed through particular histories. Impressive.

Premiered to largely positive reviews at last year’s Berlin Film Festival, Christian Petzold’s singular Holocaust drama has since got somewhat lost in the mix. That’s a shame. It’s a potentially controversial piece – telling its story in modern dress – but it is all the more interesting for its willingness to take those risks. Based on a novel by Anna Seghers, the picture concerns a young man who moves from Nazi imprisonment to Paris and then on to Marseilles (the title could hardly be more starkly descriptive). He carries papers from lost friends and, after an honest confusion, makes a dubious bid for escape. Like previous Petzold films such as Phoenix and Yella, Transit is prepared to mix broad melodrama with sober intent and formal invention. The modern setting proves to be an ingenious innovation (even if a final music cue pushes it too far). All the quaint stylisation of period dress is nudged aside for a stark reality that clenches the viewer in its cold grip.

Would we be just a little keener on Farhadi’s latest if we’d never seen another of the great Iranian director’s films? Perhaps. This is a solid European art movie featuring strong performances, gorgeous cinematography and some clever, elegant editing. Unfortunately the familiar strains from the director’s A Separation and The Salesman – again a couple is put under strain following a mysterious crisis – only serve to emphasise its occasional lack of oomph. Cruz and Bardem play a couple returning home to Spain for a wedding. When someone close to them goes missing, the family are thrown into distress and confusion. At times it plays like Agatha Christie (everyone has a motive as in Murder on the Orient Express). At others it plays like Ingmar Bergman. But it always plays like a rather too glossy version of Asghar Farhadi: neat plot turns, elegant anguish, picturesque tension. There are many worse things.