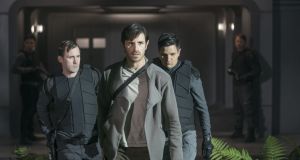 The Irish film and television industry has suffered a setback after the Syfy channel announced it was cancelling its series, Nightflyers, which was made at Troy Studios in Limerick.

Nightflyers, adapted from a novella by Games of Thrones author George RR Martin, was a critical and ratings disappointment and its cancellation after just one season is not regarded as a surprise. But the news represents a setback for the new Troy Studios complex in Limerick, which now sits unused.

It is also a blow to Screen Ireland, which had announced ¤850,000 in state funding for the 10-part series. Syfy and Netflix, which carries Nightflyers outside the US, has not disclosed the overall budget, though it is believed to have been the most expensive undertaking in the history of the Syfy channel.

“Syfy has taken the decision not to renew Nightflyers for a second season,” said Troy in a statement. “Nightflyers was Troy Studios first production at our new studio lot in Limerick; it was a positive partnership with NBCU, which in turn helped place Troy Studios firmly on the international circuit of production studios.

“Troy Studios appreciate the productive collaboration, which in turn also helped to make Troy Studios as well-known as it is today, a familiar name in the global production world. Both NBCU and Troy look forward to collaborating again in the future.

“Most importantly, the Nightflyers series was the genesis for establishing a crew base in the Limerick area and with our training partners, we will continue to grow the skills needed for the film and TV production industry here in the mid-west.”

The Irish Times has approached both Screen Ireland (previously the Irish Film Board) and NBC Universal, parent company of Syfy, for comment.

The announcement has been received with a degree of stoicism at Troy. Nightflyers was an instant flop when it debuted on Syfy in November and a renewal was not seen as inevitable. The series is thought to have been worth about €70 million to the mid-west economy.The studio is believed to be in talks with a number of production companies with a view to announcing future projects. It currently employs about 10 administrative staff.

Nightflyers, Set aboard a haunted space ship travelling to the edge of known space, had been regarded as a potential cult hit for Syfy and Netflix. George RR Martin wrote the novella in 1980 and would later go on to author the Game of Thrones novels. Thrones, which concluded production last year and the final season due on screen in April, is one of the biggest successes in television. Its main studio was in Belfast, with shooting also taking place around Northern Ireland.

But Nightflyers could not capitalise on Game of Thrones’ popularity. It languishes at 34 per cent rating on the Rotten Tomatoes review aggregation site. One indication that all was not going well was the decision by Syfy to “strip” Nightflyers by airing it nightly from December 4th – regarded in the industry as a dumping tactic for a property unlikely to find a mass audience. Its premiere attracted a disappointing 623,000 in the US, which fell to 420,000 live viewers for the finale. It debuted on Netflix on February 10th but, on the evidence of the cancellation, has not become a hit for the streaming service.

The Nightflyers cast and crew wrapped up season one production last summer and will in many cases have moved on to other jobs. They include Dublin actor Eoin Macken who played lead character Karl D’Branin and who stated last month that he had didn’t know whether Nightflyers would be renewed. It also featured Gretchen Mol and Co Cavan actor Brían F. O’Byrne, while 1980s film star Andrew McCarthy directed two episodes.