Have you noticed how Toy Story 4 isn’t so different from Chernobyl? 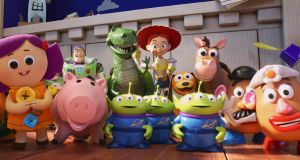 Toy Story: the four films must be among the greatest cinematic achievements of contemporary Hollywood

Sometimes very different bits of the culture come at you simultaneously. This week, for example, I watched Pixar’s latest Toy Story and the opening episodes of HBO series Chernobyl within 24 hours.

At first glance, the two could hardly appear more different, but they explore exactly the same themes: the nature of conscience; the tension between individual and community; self-sacrifice, faith and forgiveness. Both are aesthetic triumphs, bringing the viewer into brilliantly realised universes in extraordinary detail: the totalitarian drabness of the Soviet end-of-days in one; a electric Kool-Aid version of contemporary America in the other. And in terms of performance, plotting and sheer emotional heft both rank among the most impressive achievements of the year.

You might argue that one is about a human catastrophe that affected hundreds of thousands of lives, while the other is about a plastic cowboy struggling with self-esteem issues. Randy Newman does not appear on the Chernobyl soundtrack and nobody watches their skin burn off in Toy Story 4. But each in its own way is an example of cinematic excellence and tells us something about narrative in the second decade of the 21st century.

Six hours may be the ideal running time for a contemporary drama, with more scope for narrative complexity and character development than a feature film, while avoiding the pitfalls of the multiseason format

We’ve heard so much in recent years about the disruption of what the French like to call the Seventh Art that we don’t necessarily ask enough questions about the implications. For almost a century, the pre-eminent narrative form in moving image-making was the feature-length film, running somewhere between 90 minutes and three hours. There was no particular reason for this, beyond the role the feature film played in maximising revenue from the cinemas which generated most of a film’s profits. But it developed its own internal rules about structure and story.

The cable and streaming revolution was supposed to unleash the potential of much longer episodic drama, with story arcs unfolding over multiple seasons. This would allow the narrative complexity and intellectual sophistication of the literary novel – what the Wire creator David Simon sardonically tagged “the Dickensian aspect” – to flower on screen.

It was a silly idea, based on the same reductionist misunderstanding of the artform that has plonked film awkwardly into the English curriculum in our schools. And by now it’s obvious it hasn’t come to pass. Yes, long-form television has improved immeasurably, but you can count on one hand the dramas that have successfully maintained a high standard over several seasons.

At the same time, mainstream commercial cinema increasingly relies on a small number of franchises with recurring characters and story arcs stretched over a decade or more. The ambitions and aesthetics of TV increasingly aspire towards the cinematic, while big-budget movies take on the characteristics of episodic TV. This mirror effect reached new heights this year with the simultaneous crescendos of Game of Thrones and the Avengers cycle. Meanwhile, the feature film, reduced in stature, retreats to the safe space of the arthouse or the “prestige drama” ghetto.

It’s impossible to know where all this may be going, but it’s certainly not all bad. I would happily make the case for the four Toy Story films ranking among the greatest cinematic achievements of contemporary Hollywood. Chernobyl is a powerful, disturbing, brilliantly made drama (and why is HBO still so much better than Netflix at this stuff?).

The full Toy Story series is about 360 minutes long; Chernobyl is around 20 minutes shorter. Obviously the circumstances of their production and distribution are a little different; audiences had to wait more than a quarter of a century to get from the beginning to the denouement for Woody, Buzz and friends (if it is the denouement, as we must all hope).

But there may be something to be said for six hours as the ideal running time for any contemporary drama. It offers greater scope for narrative complexity and character development than a feature film, while avoiding the pitfalls of the multiseason format. I’ll never get back those hours I spent with Arya and the Faceless Men in Game of Thrones, or noodling around some silly alternate reality in Lost, or sighing loudly at the entire second season of True Detective. Perhaps the greatests skill is knowing when exactly to fade to black.