Toy Story 4: A bolted-on afterthought to a tidy trilogy

Review: It’s not an embarrassment but Toy Story 4 is not a top-flight Pixar movie 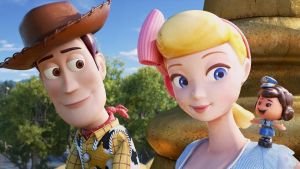 I guess everything is a trilogy until it becomes a tetralogy. But the first three Toy Story films really did form a tidily knotted whole. The end said goodbye both to the toys and to whole generations of fans.

The market will not be denied. So, we have more. Toy Story 4 inevitably plays like a bolted-on coda to the previous episodes. If the production values were a little less dazzling – the animation of hard surfaces is now beyond the photo-realistic – then you might mistake it for a straight-to-streaming feature (what we used to call a “video”).

It is, however, better than such things are normally allowed to be. The jokes are nippy and subversive. The inevitable middle-act chaos is less haphazard than than in Finding Dory. Some long-standing annoyances have been addressed.

Early on, with the introduction of a new character, the film gets at the series’ devotion to corporate-driven play. Bonnie, the team’s new child, lonely on her first day at school, makes her own plaything out of a spork and some pipe-cleaners.

Forky (voiced well by Tony Hale), who stands for independent thinking, will surely never be marketed in the manner of so many Buzz Lightyears (only joking). Confirming the film’s shift into queerer territory, Forky resists conformity as he repeatedly asserts: “We are trash.” Make of that what you dare.

The new Toy Story also makes some effort to address the nauseating sycophancy towards the now departed and not-much-missed Andy. Up to this point, Woody – and, to a lesser extent, his pals – have toadied up to their child as the servants toadied up to the Bellamy family in Upstairs Downstairs.

Reintroduced to hipper, less repressed Bo Beep on a road-trip to the interior, Woody, always a narc and a class traitor, ponders the possibilities of an emancipated life.

There are issues with these reinventions. The characters have hitherto been defined by the stereotypes that generated each toy. Isn’t it breaking those rules for Bo Beep to become Imperator Furiosa (for all that we celebrate her liberation)? Woody can’t be Roy Rogers and Billy the Kid.

Such inconsistencies reinforce the sense that we’re watching a lucrative afterthought. Happily, there are compensations in some fine new characters: Christina Hendricks voices a scary doll with designs on Woody; Keanu Reeves makes MVP as a Canadian variation of the Evel Knievel toy. The relegation of Buzz to third-string status scarcely matters when Keanu is getting a laugh with the words “boxing day”.

Not absolute top-flight Pixar. No embarrassment either.