Galway Film Fleadh to be reimagined as digital event 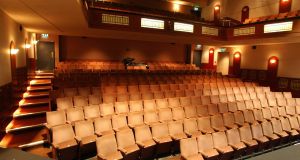 The Galway Film Fleadh is to be reimagined as a digital event for its 32nd edition. With cinemas not scheduled to open until August 10th, the Fleadh, which runs from July 7th to July 12th, will offer virtual attendees the opportunity to view shorts, features and live presentations via a streaming application. Speaking to The Irish Times, Miriam Allen, managing director of the festival, revealed that key funding pledges were confirmed on Friday afternoon.

Despite the Covid-19 outbreak, the Fleadh thus remains a hub event within a reimagined Galway 2020 European Capital of Culture programme.

Festivals such as Cannes, Venice and Toronto have already announced they will be providing content for an upcoming YouTube project called We Are One, but those contributors made clear the online experience was not to be seen as even temporary replacement for the physical event. Ms Allen and her colleagues at the Fleadh, the centre of the Irish film calendar, have made a more radical decision. The festival that premiered such domestic hits as John Carney’s Once and Peter Foott’s The Young Offenders, will, for one year only, transfer into the online sphere.

“One of the lessons we have learned from other festivals that have pivoted online is that you stick as closely as possible to the physical event,” Ms Allen said. “We will have an opening film. We will have a closing film. We will have our shorts. I was on a Zoom call to LA to the Academy of Motion Pictures to make sure that our Oscar-qualifying categories . . . are still eligible. And they are.”

The Academy had already announced that, under certain conditions, features that premiere only online can compete for Oscars. The Fleadh acts as a qualifying event for the best short animation and best live-action short categories at those awards.

Ms Allen said films would be allotted a specific date and start time, but it is not yet clear how much flexibility customers would have within that frame. Will we all be sitting down to watch the evening film at eight o’clock?

“That we are still working out,” Ms Allen said. “What we are trying to do is assign a time slot as if you were at the Fleadh. It will be geo-blocked to the island of Ireland. We are only selling a limited number of tickets. So the maximum will be the capacity of the Town Hall. That is very important. We are not in the business of exploiting films online. We are not trying to interfere with any release further down the line.”

Limiting ticket sales to the capacity of the Town Hall Theatre – for three decades the Fleadh’s emotional home – will help foster a festival mentality. Tickets will be “competitively priced” at between €5 and €7.50. “Geo-blocking” the event within Ireland will ensure that some sense of local spirit remains. The festival market will take place online. Seminars and Q&A sessions will go ahead on familiar video-conferencing applications.

There are, however, complications. The rights holders of releases may be concerned about internet piracy.

“We are partnered with a leading streaming service called Festival Scope,” Ms Allen explained. “That is costing quite a few bob. They have been around a long time in the film industry.” The service has, indeed, been long used as a secure streaming option for journalists and buyers at major festivals.

“The last momentous thing that happened to me, during a Fleadh was 25 years ago when I gave birth to my youngest son,” Ms Allen said. “The pain isn’t quite the same.”

William James: in praise of the Irish goodbye
9