There’s no grit, no Hillary Clinton, and little discussion of race relations or Donald Trump 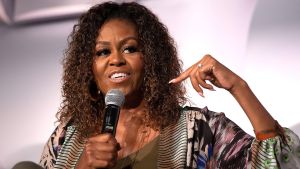 The Netflix listing tells us this study of Michelle Obama is “intimate” and “feel-good”. Measuring your tolerance for soft-soap boosterism, you can regard that second descriptor as either recommendation or warning. Nobody’s happy feelings about the former US first lady are challenged. Few new angles are discovered. Becoming does, nonetheless, put us in pleasant company for an hour and a bit. The filmmakers may qualify as “essential workers” on that basis alone.

Nadia Hallgren’s film is largely a promotional tool for the autobiography of the same name (and thus a promotional tool for its author). Early on, a case is made for the book tour as an inspirational event — and this one is that — but the jaunt still, like most such things, comprises a writer being interviewed by a celebrity before an already convinced audience.

These are, however, no intimate signings in the Books’n’Stuff coffee shop: the scale is staggering and the levels of adulation can scarcely be credited. Large portions of Becoming find the camera moving across 10 thousand agape mouths and 20 thousand damp eyes as Michelle talks us through her passage from working-class Chicago to Princeton to the White House. I haven’t seen so much rapture in a film since Justin Bieber’s Believe.

The temptation to make specific comparisons with a pioneering female filmmaker of the 1930s will be resisted for fear of invoking Godwin’s Law (and casting inexcusable aspertions on our admirable subject).

Hallgren can be forgiven for not digging dirt. Michelle Obama had enough of that from Fox News, and she is entitled to a soupçon of hagiography. But it would do no harm to see a little more of the forensic edge we know that — as a lawyer and a fighter — she possesses in abundance.

You see snippets here and there. She is correctly and articulately angry about her late father losing out to less intelligent colleagues because of his race. We pull away too soon from a potentially fascinating conversation with a contemporary whose grandparents, guilty of “veiled racism,” were part of the white flight from central Chicago in the 1960s.

The closest she comes to addressing Donald Trump’s victory (Hillary Clinton does not even get mentioned) is a weary engagement with abstention. “I understand that people voted for Trump,” she says “But the people who didn’t vote? … This is not a game.” As the film drifts off somewhere more cosy, you find yourself yelling at the screen. “More of that! Tell us what you really think!”

For the most part, to the accompaniment of unthreatening cocktail-bar jazz, the film transports her from adoring book group to heaving auditorium. Biographical asides are sparse and brief. We see some snaps of her childhood. We get a few images of her time at Princeton. Michelle reminds us that she and Barack really did meet cute in the manner of a 1990s romcom. The briefest snippet of her grown children serves only to confirm how successful they were in keeping Malia and Sasha out of the limelight.

Rather than a soothing promo, the film is, perhaps, more of an accompaniment to the book — something like an old-school DVD extra. The filmmakers, betting that most potential viewers will have read that volume, feel Michelle’s life story needs no further reiteration. Fair enough.

But the opportunity to tease out The Meaning of Michelle has been squandered. Why do so many pundits feel that, had she run in 2020, she could have beaten Trump without taking a breath? Tell us more about how (or if) her husband’s presidency changed the conversation on race. Give us some grit.

There is maybe one revelation in there. Towards the close, Michelle argues that she and Barack are not likely to be at the forefront “for that much longer”. So we can pretty much rule out a vice-presidential run.

On Netflix from May 6th