Nothing Fancy: The English mother of Mexican cuisine 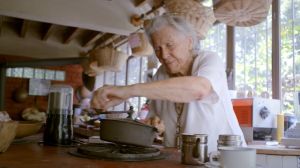 Diana Kennedy is still aloft and defiant in her late nineties.

It’s safe to say that Elizabeth Carroll’s enchanting documentary is the only one of this week’s premieres to offer a recipe for a durable staple.

The fearsome Diana Kennedy does a fair bit of cooking in Nothing Fancy, but we get a complete method for only her guacamole. She positively fumes at the suggestion of garlic. She cackles at an American lady who once suggested the finished result was too lumpy. “If they don’t like cilantro then don’t invite them,” she says of those who dislike what we call coriander (with reason).

Nothing Fancy is a rare documentary one would wish longer

Ms Kennedy, still aloft and defiant in her late 90s, did for Mexican cooking in the 1970s what Elizabeth David did for French a decade and a bit earlier. Neither “discovered” a cuisine. The French and the Mexicans had already done that for them. But they introduced regional dishes to an international audience in a fashion that was as rigorous as it was respectful.

Early on in Nothing Fancy, the viewer might get a little antsy about cultural appropriation — not least when a contributor suggests this elderly Englishwoman knows “more than anyone else” about Mexican cooking. But it fast becomes clear that she has rooted herself in the culture that brought her renown.

She insists that each recipe be credited to the person she learned it from. She lives alone in a house 100 miles from Mexico City and, when not arguing for sustainability, shops aggressively in the local markets. The nation is sufficiently relaxed about her contribution to have awarded her the Order of the Aztec Eagle.

The film suggests that, as well as being a culinary evangelist like David, Kennedy has a gift for performative bossiness in the style of Julia Child or (heaven save us) Fanny Cradock. Many are the told-off younger people. “Don’t make an English person tea,” she barks when someone offers a pale infusion. A local vendor gets a rocket for selling produce with artificial flavouring. Some poor attendee at her “boot camp” — who has paid handsomely for the privilege — shuffles feet as her insufficiently salted rice is poked with an unimpressed spoon.

Still, Kennedy has earned the right to dominate. It is the most unlikely life story. Born in Essex as Diana Southwood, she joined the Women’s Timber Corps (no, me neither) during the war and carried a love of trees with her through life. After VE Day, she moved to Canada and then to Haiti where she met and fell for a New York Times journalist, Paul P Kennedy.

In 1957, they travelled to Mexico City, a place that immediately fired her culinary passions. While Kennedy was on assignment, she prowled the markets and picked up information on a cuisine that — to an English woman of her generation — would have been as unfamiliar as the landscape of Jupiter. Twenty years later the enchilada was still a stranger to her native Loughton.

On the death of her husband in 1967, she began giving cooking classes at their last home in the Upper West Side of Manhattan and she eventually published The Cuisines of Mexico, her first cookbook, in 1972. Television work and further volumes followed.

Nothing Fancy is a rare documentary one would wish longer. The contemporary Kennedy is marvellous company: awkward, intelligent, amusing, realistic about mortality. The archival footage reveals one of those unusual creatures who, born in the pre-television age, proved a natural on the new medium (back to Child and Cradock). Which is not to suggest that she is entirely comfortable with the crystal bucket.

Streaming on Apple and other services from May 1st

Academic freedom, boycott and the question of Palestine
9

The movie quiz: ‘Jaws’ appeared in how many James Bond films?
10