Michelle Obama’s softly softly marketing movie, plus a documentary on romcoms and two very different films from a Romanian master 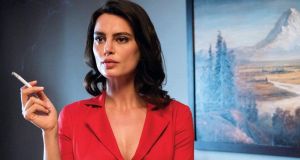 Catrinel Marlon in The Whistlers

THE WHISTLERS ★★★★☆
Directed by Corneliu Porumboiu. Starring Vlad Ivanov, Catrinel Marlon, Rodica Lazar, Agustí Villaronga, Sabin Tambrea. Curzon Home Cinema, 97 min
Porumboiu, a younger master of Romanian cinema, may have made an inclination towards the mainstream with this zippy, twisty, confusing exercise in double-bluff. Ivanov plays a troubled cop who investigates a strange (and real) whistling language to enable a heist. It’s almost as odd as it sounds and at times a lot more confusing. But The Whistlers abounds with style and original energy. Marlon is particularly good as femme fatale called (what else?) Gilda. DC

The Netflix listing tells us this study of Michelle Obama is “intimate” and “feel-good”. Measuring your tolerance for soft-soap boosterism, you can regard that second descriptor as either recommendation or warning. Nobody’s happy feelings about the former US first lady are challenged. Few new angles are discovered. Becoming does, nonetheless, put us in pleasant company for an hour and a bit. The filmmakers may qualify as “essential workers” on that basis alone. DC

Sankey’s deep delve into the romantic comedy starts out like a takedown before the genre, like one of its romantic heroes, makes a last-minute dash and wins over the writer-director. There are beautifully curated clips of some very ugly tropes. But as Sankey and various contributors – including actor Jessica Barden and producer Charlie Lyne – note, there’s something irresistible about this most “heteronormative, white and shmaltzy” genres. This does not stop her also addressing outsider variations. TB

Play close attention. The rules of football are wrong. Romanian civil servant Laurentiu Ginghina made the beautiful game more beautiful (and safer) with an octagonal pitch and each team split into two parts – attackers and defenders – with each confined to their own half. His thoughts on the offside rule are revised throughout this engaging documentary portrait by Ginghina’s childhood chum, Corneliu Porumboiu, the auteur behind such deadpan delights as 12:08 East of Bucharest and Police, Adjective. It’s utterly original and completely captivating. TB