Romantic Comedy: History of the genre tracked from the 1930s 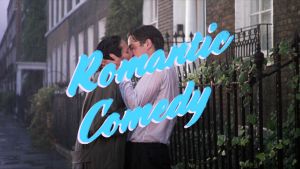 Elizabeth Sankey tracks romcoms from the 1930s when the genre was dominated by immigrant directors and sassy dames.

Musician and writer Elizabeth Sankey’s deep delve into the romantic comedy starts out like a takedown. But the genre, like one of its romantic heroes, makes a last-minute dash and wins over the writer-director later in this documentary.

There are beautifully curated clips – a montage from more than 160 films from 1934 to 2018 – of some very ugly tropes. Various rom-com heroines are exposed as absolute psychopaths. Sandra Bullock pretending to be unconscious Peter Gallagher’s fiancee in While You Were Sleeping could easily be the plot of a horror movie.

When Sarah Jessica Parker is hired by Matthew McConaughey’s parents to coax him out of the family home in Failure to Launch, she explains her dissociative  methodology: “You look nice, you find out what they like, and you pretend to like it too.” (She later sleeps with him on the job.)

Sankey has questions. Why are the sleek professional women who inhabit the genre lumbered with klutzy pratfalls? Why are ambitious women, such as The Devil Wears Prada’s Anne Hathaway, punished with lousy partners? She questions the beer-swilling, hotdog-chomping Cool Girl archetype that is skewered for her bad faith in Gone Girl.

She tracks the history of the genre from the 1930s when the rom-com was dominated by immigrant directors and sassy dames. She correctly identifies Marilyn Monroe as a key romcom figure and the remake of Monroe’s last unfinished film – Move Over Darling with Doris Day – as the pivotal moment when the powerful siren made way for the self-doubting eager-pleaser.

In this spirit, say hello to the vacuous indie it girls of 500 Days of Summer (pretty, likes Belle and Sebastian) and Garden State (pretty, likes to make unique noises). But never mind the women. Rom-com menfolk are aggressive pursuers who respond to “no” by stalking their victims/beloveds that little bit harder. Even when they’re played by the normally lovable Jack Black.

As Sankey and various contributors – including actor Jessica Barden (The End of the F***ing World, The Lobster) and producer Charlie Lyne – note, there’s something irresistible about this most “heteronormative, white and shmaltzy” genre. When Harry Met Sally is the perfect dramatisation of the platonic ideal. (As detailed by Marisa Tomei in Only You.)

The romcom is a remarkably versatile thing. Its beats lurk under such “respectable” films as God’s Own Country and The Silver Linings Playbook.

As the vocalist in the band Summer Camp, Sankey previously contributed to the soundtrack of the teen movie Beyond Clueless. Occasionally, Summer Camp’s synth-pop songs feel a little arch and wistful for the vintage cheese that’s on screen, but in all other respects this is note perfect.

Romantic Comedy is on Mubi from May 7th