In 2015, the actor was convicted of assaulting a movie executive at Sundance. His quiet rehabilitation continues with a role in Tarantino’s new film and, oddly, a new Irish western 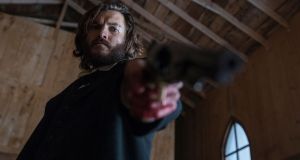 Emile Hirsch in Ivan Kavanagh’s Never Grow Old. ‘I remember Sean Penn saying, you should do a western. You have the face for a western.’

Emile Hirsch knows we’ll get there eventually. No actor who serves time for aggravated assault will ever fully shake off the opprobrium. In February of 2015, Hirsch was charged with that offense after strangling Daniele Bernfeld, a Paramount executive, to the point of unconsciousness at the Sundance Film Festival. He pleaded guilty and was sentenced to 15 days in jail. He also paid a $4,750 fine and carried out 50 hours of community service.

Drink was involved. There was discussion of “a stimulant”.

“I know it was completely wrong and reckless and irresponsible,” he told the courtroom. “I have no excuses for not remembering. I put those chemicals inside me.”

To that point, Hirsch had been best known for his performance as Chris McCandless, doomed survivalist, in Sean Penn’s Oscar-nominated Into the Wild from 2007. He was also strong opposite Penn in Gus Van Sant’s Milk.

It hardly needs to be said that roles were harder to come by when he re-emerged into the workplace. Making no excuses doesn’t exactly count as an excuse. He says little about the subject in interviews, but he doesn’t shut down conversation either.

“Obviously I am very sorry and it is still something I really regret,” he says when I go there. “I have been trying to live my best life and be my best self, moving forward.”

Hirsch is cautiously edging back into a corner of the limelight. This week he enjoys a supporting role as Jay Sebring, sometime boyfriend to Sharon Tate, in Quentin Tarantino’s Once Upon a Time in . . . Hollywood. Later in the month, he stars as a reluctant hero – a man who does what a man’s gotta do – in Ivan Kavanagh’s impressive Irish western Never Grow Old.

We’ll get to Tarantino in a minute. But there is much to puzzle over in the Kavanagh film. How on earth did a Californian movie star end up shooting a western in rural Ireland? Kavanagh is respected in the domestic industry for excellent pictures such as the Bergmanesque The Fading Light and the Dublin horror The Canal. But he’s hardly an international name.

“Ivan sent me a script for a different film that I really liked,” he says. “We Skyped and he said there is this other film that I am trying to make. It’s a western. And I said: ‘That sounds really cool.’ I read it and I liked it right off the bat.”

A conversation a decade earlier spurred him towards accepting the offer.

“I have never shot a western anywhere,” he says. “But I remember, shooting Into the Wild, Sean Penn saying: ‘You should do a western. You have the face for a western.’ He said it a few times. So I had it in the back of my mind whenever a western came into my view. Maestro Sean said I should do one. Ha ha!”

As Hirsch points out, Connemara – in winter, anyway – stands in very well for midwestern bits of the California Trail. The film is set on that route during the 1849 Gold Rush. Hirsch plays an Irish carpenter who, after much provocation, stands up against incoming villain John Cusack. There’s a bit of Shane in there. There’s some The Man Who Shot Liberty Valance. This is not something you see every day from Irish cinema.

“I am around 13 per cent Irish,” Hirsch says. “I did that online thing. Walking around, I thought: there are a lot of dark-haired, short people here – just like me. That’s interesting. I had a great time. I have friends who are Irish. I have been friends with Eve Hewson for 10 years. She’s my Irish buddy.”

Bono’s daughter? (Sorry, Eve.) So he is in with the Irish royal family?

Never Grow Old is a low-key, modestly budgeted independent release. More eyebrows were raised at Tarantino’s casting of Hirsch in star-stuffed Once Upon a Time in . . . Hollywood. It added further awkwardness that the film hangs around the murder of Sharon Tate and her friends in 1969. Sebring, who was also killed by members of the Manson family, was a much-liked celebrity hairstylist from Alabama. The picture represents him as a decent fellow in a dizzying environment.

“Everybody loved him,” Hirsch says. “Quentin kept telling me: ‘Everyone loved Jay.’ Quentin wanted to capture that friendliness, the fact that everyone liked him. It wasn’t a phoney thing. He was just a good guy. I went in with the best intentions. But it’s not a biopic. It’s Quentin’s vision. I wanted to keep the liveliness. It’s not Hamlet. It’s not method. Quentin’s dialogue was Quentin’s dialogue.”

That’s what we’ve always heard. But Hirsch tells a surprising story about the director’s techniques on set. It sounds as if some improvisation is allowed.

“I show up and there is no dialogue in the scene for me,” he says. “Quentin says: ‘Listen to this story I am about to tell you and then I want you to report it back when I roll the camera.’ Quentin proceeds to tell me a three-minute story about Jay Sebring cutting Steve McQueen’s hair.”

They shot the scene. They shot the scene again. On every occasion, Tarantino refined details of Hirsch’s interpretation. Alas, you won’t see the sequence in the current release, but Hirsch believes it is destined for an extended cut.

Born in 1985, Hirsch will remember nothing of the industry at the time of Tarantino’s film, but he has much experience of the Hollywood highways and byways. Early life was spent between New Mexico, where his mother lived, and his dad’s home in Los Angeles. He remembers being buffeted from one motel to the next after his parent’s divorce. The interest in acting sprung from an early addiction to movies on video.

“My sister was interested in musicals and acting,” he says. “We would watch the musicals together. We would sing together. There was a certain point when my parents said: ‘You kids are such hams.’”

Before he’d reached his teens, he was appearing in episodes of TV shows such as 3rd Rock from the Sun and Early Edition. By the time he came to play Jay Adams, legendary skateboarder, for Catherine Hardwicke in Lords of Dogtown, Hirsch was already something of a veteran. It was that 2015 film that alerted Sean Penn to his talents.

“He kind of knew this guy that I played, Jay Adams,” Hirsch explains. “The guy’s not famous. So when people see me they don’t know that I am actually doing him to the degree I am doing him. But Sean did. He met me and he thought: ‘This guy is not Jay Adams at all. But he can do him.’ He also thought that if I wasn’t able to endure a bit of discomfort I’d never have been able to do it.”

Hirsch has a balanced view of McCandless, the subject of Into the Wild, who hitchhiked to a remote part of Alaska to live off the land, but was found dead months later. He admires his independence of spirit, but acknowledges the recklessness that contributed to his death from starvation in 1992. Hirsch feels that example serves to warn young people unprepared for the challenges of the wilderness.

“You have to acknowledge the price he paid so that other kids won’t make those same errors,” he says.

Hirsch is a hard man to read. Even before the events of 2015, he had a reputation for unpredictable (if benign) behaviour. After shooting Into the Wild, for which he lost 40 pounds, he gave all his money away to Oxfam. One doesn’t need to ask why this is worth doing, but it not something that many people actually do. It seems that McCandless was an influence.

“I didn’t have millions of dollars. I didn’t have a fortune,” he says. “But the accounts didn’t look very happy. If I had been a very wealthy person I might have thought twice. But it was about trying to get as close to that mindset as I could. That’s all it was. Respecting that mindset. It wasn’t like a method thing where I’d rob a bank if I was playing a bank robber. There was something selfless in that I wanted to experience.”

Hirsch and Ivan Kavanagh seem to have properly connected. He talks about two films he intends to make with the Irish director over the next year. He is also working towards the release of an electo-pop album.

We’ll see how that goes. He won’t be able to ever fully escape (nor, perhaps, should he) from the consequences of his actions at Sundance in 2015. He does not, however, pretend that the conviction didn’t shake him up.