Event of the Week: The Dublin Feminist Film Festival 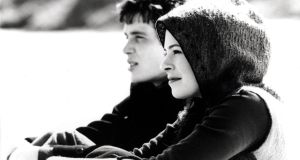 Kirsten Sheridan’s controversial debut feature, Disco Pigs (2001), is among the films to be featured in this year’s Dublin Feminist Film Festival

The Dublin Feminist Film Festival (DFFF) was launched in 2015 with a bang and the Irish premiere of Mary Dore’s fantastic exploration of the women’s movement in the United States, She’s Beautiful When She’s Angry. In the intervening years, the festival has provided a platform for such fascinating films as Amaka’s Kin: The Women of Nollywood, Ovarian Psycos, and The Seen and The Unseen.

There will be further fresh outings and a discussion panel for two Irish dance films, Oonagh Kearney’s Five Letters To The Stranger Who Will Dissect My Brain (2018) and Claire Dix’s We Are Moving: Memories of Miss Moriarty (2016).

“The selection of older and existing films in the festival’s programme gives audiences an opportunity to think retrospectively about how women have contributed and continue to contribute to Irish cinema,” says DFFF manager, Aoife O’Toole.

“In today’s world where the viewing of films can occur across a range of different platforms, the longevity of a film’s theatrical release is greatly diminished. With the exception of Disco Pigs – which was released in a pre-streaming/ on-demand era – DFFF would argue that all of the films in the programme have to greater or lesser extents risked being overlooked due to the sheer volume of viewing content available to audiences now.”

At a moment when Screen Ireland and other funding bodies are working towards gender equality, the DFFF seeks to celebrate those women who have bucked the existing odds. The traditional gender disparity of the film industry may be slowly changing, whether through Screen Ireland’s 2015 six-point plan on gender equality, or the Marvel Cinematic Universe’s recruitment of Cate Shortland and Chloe Zhao. There remains, however, a need for a designated feminist space in cinema programming, says O’Toole.

She’s not alone in that thinking. The DFFF is one of many similarly themed events around the world. In recent years, older feminist programmes and bodies including Cineffable (established 1989), Women in Film and Television Vancouver (1989), Feminale (1984) in Dortmund and Cologne, and Seoul International Women’s Film Festival (1997), have been joined by newer feminist film festivals in London and Chicago.

“Roughly 20 per cent of feature films in Ireland are directed by women and that number holds in most countries,” says O’Toole. “Part of the motivation for our festival is to highlight those 20 per cent of films and promote them, while also trying to encourage and inspire more women to make films. The label feminist film is simultaneously useful and problematic.

“To distinguish a film as feminist may be off-putting for some cinema-goers and have an alienating effect, so there is possibly a need for discretion in terms of how the label is applied. However, until we see more films and narratives that represent the diversity of female experiences the term does provide a useful way of giving visibility to films and film-makers that are trying to challenge the dominant narratives and archetypes that typify Hollywood and other national cinemas.

“A feminist film to us, is a female driving the point of view, voice of the film, through women being present in the creative leadership of a film’s team as well as directing the production management operations both during and after production. Anyone asking the question ‘Why a feminist film festival?’ should probably watch Geena Davis’s just released documentary This Changes Everything about the conscious and indeed unconscious gender bias in the film industry – on and off-screen.”