Gaza: ‘Most people here are ordinary like me. They just want to live their lives’

Review: Dismissed by some as ‘propaganda’, this documentary studiously avoids politics 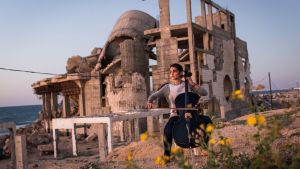 Karma, a 19-year-old cellist, plays facing the ocean in Gaza

Garry Keane and Andrew McConnell’s beautifully shot documentary is careful and clear with the details.

Opening credits tells us that Gaza is a narrow strip of Mediterranean coastline bordered by Israel and Egypt. That it measures just 140 square miles and is home to nearly 2 million Palestinians. That the Islamic resistance movement Hamas came to power in three elections and have been governing Gaza since 2007. That since then Israel has imposed a blockade on Gaza, completely sealing its borders. That this was filmed between the Israeli war in 2014 and the border protests in 2018.

Just the facts, right? Yet the film’s very existence is enough for some critics to dismiss it offhand as “propaganda” or “manipulative and disingenuous”. That’s a shame because Gaza studiously avoids direct political engagement, It is, rather, a portrait that is in keeping with a taxi driver’s description of Gaza: “Most of the people here are ordinary people like me. They just want to be left alone to live their lives. They just want to take care of their families and educate their children.”

That’s not easy in a place defined by violent clashes, missing limbs, brownouts and overcrowding. A busy paramedic, operating with painfully limited supplies, notes that he didn’t see his family for 52 days during the last war.

Ahmed, a 14-year-old, has 10 sisters and three brothers from the same mother; his father has two other wives. “I’m very happy that I have such a big family,” says Ahmed as he and his siblings make their way through the rubbish-strewn streets of Gaza, and back to the tiny three-room house where they all live.

“Sometimes us boys sleep on the beach,” he explains. The beach is a huge draw in Gaza; it’s a border that can’t be sealed and a tranquil horizon. Karma, a 19-year-old cellist, plays facing the ocean. “Every night I dream and I see myself on an island and all you can see is the sea,” she says. “Whenever I stand there and breathe the air of the sea I can breathe freedom.”

Final scenes bring us up to May 2018 and some of the bloodiest clashes in Gaza’s history, leaving 60 protesters dead and 2,500 injured. It’s a tragic ending for an already sorrowful film.