‘Oh Maureen, my darling, I love you so much! Your face is in my dreams,’ wrote John Ford 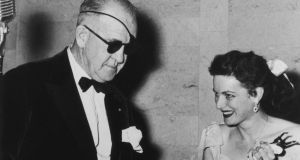 John Ford and Maureen O’Hara circa 1955: director’s feelings for the actress are evident in a letter soon to be auctioned. Photograph: Hulton Archive/Getty Images

The professional relationship between Maureen O’Hara and the film director John Ford is among the most chronicled in Hollywood history.

Together the Irish screen beauty and the Irish-American, who was born Seán Aloysius O’Feeney, made several films over a 20-year period most notably How Green Was My Valley, which won the Oscar for best picture in 1941, and their most famous collaboration, The Quiet Man, released in 1952.

The relationship between the irascible Ford, who was 26 years her senior, and O’Hara was frequently tempestuous and oscillated between extreme affection and, in Ford’s case, violence.

He punched her once on set. In her autobiography, ’Tis Herself, published in 2004, O’Hara, who died aged 95 in 2015, speculated: “For years I wondered why John Ford grew to hate me so much. I couldn’t understand what made him say and do so many terrible things to me. I realise now that he didn’t hate me at all. He loved me very much and even thought that he was in love with me.”

The extent of Ford’s affections for O’Hara are laid bare in a recently discovered letter which her grandson, Conor Fitzsimons, found in his grandmother’s house.

The letter, on Ashford Castle headed paper, reads: “Oh Maureen, my darling, I love you so much! Thank you my love for the few months happiness you have given me. I miss you so much. God, I long for you. I dream of you. Your face is constantly in my dreams.”

Ford takes a disliking to his new maid because she “insists on closing the hall door to the breakfast room so I can’t see your picture smiling mockingly at me - do you not know the picture? It kids me all the time up on the wall making fun of me.”

The letter, which was found in a book about Ashford Castle, is undated, but it is almost certainly from during or before the filming of The Quiet Man. Most of the cast and crew stayed at the luxury hotel in Co Mayo for the duration of the shoot in June 1951.

Ford mentions the author and IRA fighter Ernie O’Malley who is “with us – a great man still suffering from Black and Tan torturing”.

O’Malley was employed as a consultant on set though there was very little IRA activity in the film at all.

A previous cachet of letters, which went for auction in 2017, hinted at Ford’s true feelings for his protege, but this letter goes much further.

Mr Fitzsimons said Ford was certainly infatuated with his grandmother, but there is no evidence that his affections were ever reciprocated.

“It’s unique in that there was an unspoken thing that Ford had a crush on her. I think only a few people like John Wayne and herself knew about it,” he said.

“He was in love with the look and the person she created. He gave her a look and her name (she was born Maureen Fitzsimons).

“She used to joke that Ford had a schoolboy crush on her, but she said that about a lot of men. I’m grateful that this letter is one of those things that did not get lost or thrown away.”

Mr Fitzsimons said he has donated three-quarters of his grandmother’s archive to the Foynes Flying Boat Museum in Co Limerick.

Ms O’Hara’s third and final husband was Cpt Charles Blair who flew flying boats on and out of Foynes.

The Ford letter will go for auction in November by Bonham’s. There is no reserve price yet, but a cachet of O’Hara’s letters that went for auction in 2017 sold for $50,000.

It is hoped to unveil a statue of O’Hara in Glengariff, Co Cork, where she lived from 1968 until 2014 in advance of what would have been her 100th birthday next year.

‘He’s Jekyll and Hyde’: The inside story of an Irish barrister and conman
9