Dora and the Lost City of Gold: Delightful all-ages action-adventure

Review: Bilingual patter and a winning lightness add to the post-Indiana Jones intrigue 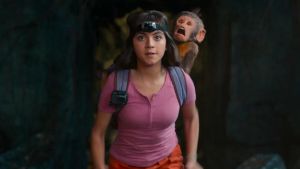 Film Title: Dora and the Lost City of Gold

Dora (Isabela Moner) is an irrepressible cheery teenager who lives in the Amazon with her explorer parents (Michael Peña and Eva Longoria). When the family uncover a clue that may indicate the location of the ancient ruins indicated by the title, they come to a decision: her parents will journey into the jungle while Dora will join her cousin Diego (Jeff Wahlberg, nephew of Donnie and Mark) in high school.

After all, it’s not healthy for a girl her age to talk to her backpack and have only Boots the Monkey (veteran actor and baby-rescuer Danny Trejo) for company.

Naturally, Dora’s high-school experience is hellish for the mortified Diego, but she remains fearlessly perky, even when she and other reluctant high-schoolers find themselves hunted in the jungle, searching for a lost Inca civilisation, and her kidnapped parents.

Remember in 2017 when Paramount announced a live-action adaptation of Dora the Explorer and we all had a good old chuckle and made barrel-scraping gestures and memes? Remember when the first stills of Isabela Moner in the title role emerged to shrieks of “You ruined my childhood?”

Well, to paraphrase its pint-sized Latina heroine: “haters no hating”. From start to finish, this all ages action-adventure, fashioned after the monstrously successful Jumanji (2017), is an absolute delight. A clever script from Nicholas Stoller (Get Him to the Greek) and Matthew Robinson (The Invention of Lying) makes merry with the bilingual interactive patter of the original Nickelodeon cartoon series.

Muppets Most Wanted director James Bobin brings a winning light-heartedness to post- Indiana Jones intrigue. A starry cast, including Benicio del Toro (who voices Swiper the Fox), has an absolute ball delivering fun, big, broad performances. Except, of course, for Isabela Moner, who plays Dora dead straight, a turn that is as magical as it is astute.