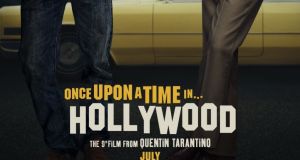 There are few subjects that more ignite the passions of correspondents to newspapers than incorrect punctuation. Quentin Tarantino has, with the title of his latest movie, given the green-ink brigade an early Christmas gift.

The New York Times (what other publication?) asked the good people at Sony Pictures for clarification. “The studio calls it ‘a creative decision, with the ellipsis placement depending on the context,” the Grey Lady was told. “That’s about all it will say other than confirming that for review purposes, the ellipsis goes before ‘in’.” So write to us only if we place those three dots earlier in the title.

The punctuation makes little sense in either position. The Irish Times stylebook explains that an ellipsis, with a space both before and after the dots, is “used to indicate the omission of a word or words”. That doesn’t seem to be the purpose here.

Quentin looks to be encouraging a dramatic pause partway through the title. We know that “Once Upon a Time in” has introduced words such as “America,” “the West,” “Mexico,” and “the Midlands” in the titles of earlier motion pictures. “Where will it be this time?” the punctuation mark seem to ask.

Then again, it could be an oblique reference to an alternative title for the Sergio Leone film you probably call either Duck, You Sucker! or A Fistful of Dynamite. That film (shot partly in Ireland) was referred to as Once Upon a Time… the Revolution on release in certain territories. Quentin loves his in jokes.

At any rate, there is a long history of eccentric punctuation on movie posters. Most ellipses exist only as material for movie trivia quizzes. Who else remembers to call Rob Reiner’s defining 1980s sitcom When Harry Met Sally…? What are the dots doing there anyway? The suggestion is, perhaps, that the film you’re about to watch will complete the title’s truncated sentence.

Few Americans queuing up for Norman Jewison’s …And Justice for All needed to be reminded that the title is from the last line of the Pledge of Allegiance. Few foreigners would have cared.

The king of the eccentric movie ellipsis – and every cinema pedant’s favourite correction – is, however, to be found among the titles of Lindsay Anderson’s If….. Yes, you counted correctly. There are four dots (and another full-stop in this case). Nobody seems sure why. The reference is to the similarly titled poem by Rudyard Kipling – “If you can keep your head …” and so on – but, in early printings, that is rendered “If-“, not “If…” and certainly not “If….”. Anderson is no longer with us to explain.

Exclamation points, though frowned upon by formal stylists, are all over the place in movie titles. Darren Aronofsky’s most recent picture was “Mother!” in most places and “mother!” in a few others. In this case, the emphasis prepares us for a conspicuous lack of restraint within the movie itself.

Everything about Airplane! is funny, including its overheated punctuation. You can make up your own mind about Oklahoma! (that is how it’s sung), Oliver! (the same), That Darn Cat! (an exclamation, to be fair) or Moulin Rouge! (as exhausting as the film).

Richard Linklater can pass all enquiries about the doubly endowed Everybody Wants Some!! to the Van Halen family. The song with that title, featured in Rick’s nostalgic romp, was so punctuated on the band’s 1980 album Women and Children First.

Parentheses are harder to come by, but there are a few showy examples. Who knows what the makers of the comedy (500) Days of Summer Were up to? We are, it appears, being told it may not be necessary to detail the precise number of days. Make up your bleeding mind, filmmakers.

The Spanish horror films [REC]and [REC]2 pointed us towards instructions for operating a video camera.

The unstoppable rise of sequels over the last few decades has put enormous pressure on colon manufactures. Here’s a fact you won’t read anywhere else: not since 2013 has the year’s highest grossing film been without that punctuation point. Well done, Frozen.

Let’s hope the upcoming, similarly colon-free Frozen 2 can zip past Spider-Man: Far From Home and Avengers: Endgame this Christmas.

Integrating titled sequels with numbered chapters has generated an ungainly stylistic chaos that induces headaches every time a bus advertisement goes past the window. Star Wars: Episode I-The Phantom Menace? Star Wars: Episode II-Attack of the Clones? Star Wars: Episode III-Revenge of the Sith? A colon and an em-dash? Why not throw in an asterisk or a section sign. How does Star Wars § Episode IX * The Rise of Skywalker look to you?

Oh well. There are worse ways of attracting attention than slinging an eccentric punctuation point here or there. John Woo’s Face/Off was good enough to excuse its inexplicable use of a symbol usually used to separate two alternatives.

M*A*S*H was only officially so named for the TV series, but it remains fun to write it thus whenever possible.

Any opportunity is savoured to position an umlaut (¨) over the “n” in This Is Spinal Tap, as the filmmakers did on publicity material. (The Irish Times publishing system is not even capable of the character.)

Prize for most unusual (borderline infuriating) use of punctuation goes, however, to an Irish film from the early part of this century. Seán Walsh’s take on James Joyce’s Ulysses was unveiled at the 2003 Galway Film Fleadh as “bl,.m”. It has been Bloom ever since. I can’t imagine why…